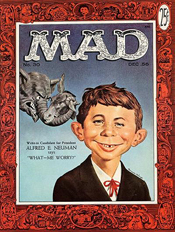 A couple years ago, Mad Magazine was demoted to quarterly release – a status it had not had since it first converted into magazine format in 1955. Shortly after, I ran into its publisher Paul Levitz and expressed regret at the situation. Paul, a major comics fan and historian, shared my feelings but said with obvious sadness “Maybe its time had passed.”

Maybe so. Mad’s return to bi-monthly status, one suspects, has more to do with the successful animated series than any publishing-revenue prerogative. Paul was right, and he’s still right: Mad’s time had passed. To his credit, it had passed back when he was still a teenager.

I came across Mad at an early age, discovering my sister’s comics stash as I was ferreting about her bedroom looking for, well, comics. And maybe spare change. Like an unbelievable number of Boomers, it totally warped my mind. Mad was part of its time: we also had Ernie Kovacs and Rocky and Bullwinkle. Steve Allen and Del Close. Chuck Berry and Jerry Lee Lewis. All assaulted a status quo that was desperately in need of destruction.

As it always is.

Perhaps these combined forces shaped me more than the average pre-adolescent. Truth to Power, there’s really no “perhaps” about it. Therefore, when Mars Attacks! came out I discovered creative people can up the ante. And Mars Attacks! ushered in the 1960s when the ante wasn’t simply upped, it grew daily and exponentially.

Somewhere along the way, Mad’s “usual gang of idiots” continued to age. Instead of hoisting our culture on its own petard, Mad sometimes turned on the latter-day iconoclasts. Not viciously, not regularly, but by the end of the decade you could hear the sound of the hardening of their arteries.

This was unnecessary, but it left room for the sons of Mad to take on the role – folks like Robert Crumb, Jay Lynch, George Carlin, Tommy Smothers, Richard Pryor, Michael O’Donoghue, Doug Kenny, Frank Zappa, Matt Groening, Mike Judge… I’m happy to say the list goes on and on. Now, the grandsons of Mad have taken over. Just as Frank Faye begat Jack Benny who begat Johnny Carson who begat Bill Maher, Mad is better thought of as a major influence than an active force.

I’m not saying Mad sucked. It continued to be funny and, often, clever. But it was totally ready for prime time. Mad was on Broadway. It became a movie (for which publisher and legend Bill Gaines apologized – in the pages of Mad). It became a television show. It became two television shows, actually, and both were more cutting-edge than the magazine had been in over two decades.

Onetime Madmen like Paul Krassner and Chevy Chase went elsewhere. If you’re in the culture evolution business and the establishment doesn’t regard you as a pariah, you’re not doing your job right.

Clearly, Paul was on the money. My inner-fanboy (who pays the rent; it’s a good arrangement) says Mad could of and should of stayed in the thick of the fray, but que sera, sera.

The massive talent of Mad was celebrated ten years ago in a wonderful book called Mad Art, by none other than Mark Evanier. It owns my highest recommendation. A new book, Totally Mad, is set for release next Tuesday, which means it’s in the “bookstores” right now. I haven’t read it so I won’t comment, but you might want to give it a look.