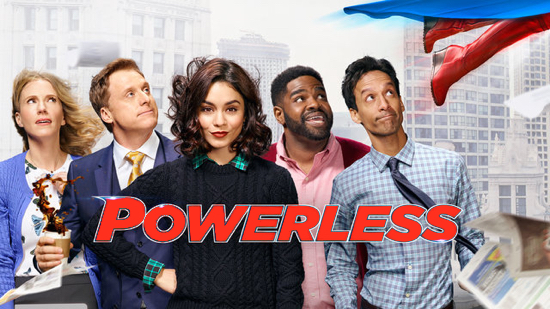 Here’s the plan. You’ll wait until the office is closed for the day and the lights are all out and then, possibly wearing a tool belt, you’ll sneak inside and remove the appliance from its place near the big chair and take it home and put it on the couch and sit next to it. Then you’ll tune in NBC’s new comedy, Powerless. (Did I mention that this will be on Thursday night?) You’ll turn on the laughing gas machine, the one that belongs to your dentist and place the mask over your nose and mouth. This is necessary, according to you, because you might not find the show funny and yet it’s supposed to make you laugh and if it doesn’t you’ll feel frustrated and to avoid this ugly feeling you can sniff the laughing gas and have yourself a good chuckle and maybe a gas-induced laugh is better than none at all.

I know very little about Powerless, not much more than it’s about an insurance company that deals with the collateral damage that would inevitably accompany the damage superheroes cause while doing their superstuff. Not the worst premise I’ve ever encountered. 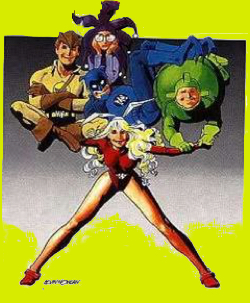 This is not new, this conflation of humor with superheroics.

A few weeks back, I mentioned Herbie the Fat Fury, who appeared in the American Comics Group titles, and Hoppy the Marvel Bunny, part of the Captain Marvel posse,  and The Inferior Five which, if memory serves, was about a quintet of costumed goofballs who did superheroish feats of the goofball variety. And on television there were Captain Nice and Mr. Terrific, whose live action adventures may have been inspired by Batman.

Ah, Batman. Saving the best for last, were we? Batman, of course, was a comic book crusader for years before he made his way to the tube. He had also appeared in two movie serials, in newspapers, and as an occasional guest star on the Superman radio series. So it was probably no great surprise that he’d pop into your living room sooner or later. But how he popped – that may have qualified as a surprise. This Batman was not merely a dark clad vigilante who prowled the city ever seeking to avenge his parents’ murder by assaulting crime wherever it was found – he was a dark-clad comedian who assaulted crime. Yep. Funny ha-ha kind of dude.

I won’t burden you with my opinions on how Batman’s comedy was achieved. Let’s just agree that is was achieved, for a while quite successfully. Then public taste moved on, leaving Batman to a protracted afterlife in rerun city. Quirky thing: Adults coming to the show for the first time tend to see it as what is was intended to be: funny. Kids, though, are more likely to enjoy it as action-adventure. I await explanations but not, I confess, on tenterhooks.

Meanwhile, we have a new show to sample.