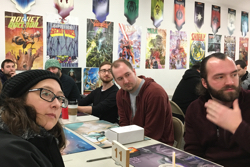 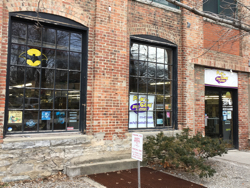 Two weekends ago, I had a lot of fun at three comic shops. I’ve been to many comic shops in my day, but during these recent visits I did something new. Ostensibly, I made the rounds to Boost My Local Comic Stores (you may have read about #BoostYourLCS in last week’s column), but the real reason I visited them was to experience my first “pre-release party.”

The newest iteration of the long-running Magic: The Gathering was about to be released, so comics and cards stores nationwide hosted a series of pre-release events, as is the custom. Fans get a chance to open a sealed deck of the newest iteration, called Aether Revolt, and then play a series of card games against fellow fans also opening up their new decks.

Magic: The Gathering, as you might know, is a strategy-based card game that’s wrapped in an intricate and fascinating mythology. Aether Revolt is the newest wrinkle to the ongoing story, as the people of a mystical land called Kaladesh are called to revolt against violent oppressors of the Consulate and take back their city of Ghirapur. 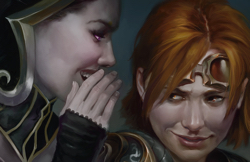 Seems like the political climate in the real world, now that I think about it.

Like a movie premiere, these events start at midnight and are filled with excitement and anticipation. I’m sure the wee-hour events were a lot of fun, but I opted for a pre-release party that started at 9 AM Saturday. There were actually lots of options from which to choose. The midnight events went all through the night, and then more were scheduled, and well-attended, all day Saturday and Sunday.

This was a fun crowd to hang with, as these fans are both collectors and strategists. They love the game and love the gamesmanship that comes from a competitive card game. In fact, every player is part of a nationwide network that the parent company, Hasbro, has created, and gets their own DCI number and ID card. 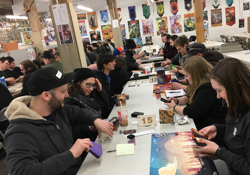 I got mine too!

There was a nice mix of fans. Old and young. Male and female. Super-social and more reserved. Everyone there, except for me – I’m the novice – knew his or her stuff and was ready to compete.

As players choose a small set of cards from a seemingly endless supply of cards, there are strategies for assembling the optimum line-up of cards. And the law of supply and demand has led to an incredibly intricate secondary market. Comics and Cards stores buy and sell cards both locally and nationwide. So beyond the playing of the games, the focused task of acquiring and managing one’s collection can be an enjoyable and profitable experience.

The painting for the art of the Magic mythology is what really impresses me. Magic: The Gathering provides a fantastic outlet for top notch fantasy artists and for fans to enjoy the artwork in an accessible format. It’s all a clever mix of classic fantasy elements mashed up with witty and whimsical characters. And some of the painterly landscapes make you feel as if you’ve stepped into a Tolkien novel. Check out a few of the painting of the newest release, Aether Revolt.

Since “Boosting Your Local Comic Store” is where we started, I should also note how much these comic shops benefit from card games like Magic: The Gathering. One retailer told me that card sales have recently accounted for an astonishing portion of his total revenue since he started augmenting his local sales with online sales. That’s pretty incredible, and I’m pretty supportive of anything that helps Geek Culture Retailers.