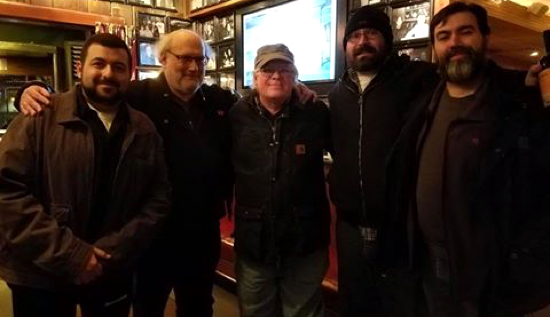 “I had a lovely brunch with Jesus Christ.
He said, “two words about inanity: fundamental Christianity,” yeah.
The food was very nice.
But then He had to go and die for my sins and stick my ass with the check.”

Just before 2016 died a fiery death, Unshaven Comics broke bread with ComicMix EIC Mike Gold and Living Legend John Ostrander. It wasn’t our first meal together, and assuredly it’s nowhere close to the last. We met for no better reason than to share a meal and a joyous time. Little did Mike know I was going to just go ahead and record the whole evening in my mind, and use it for this week’s article. I’m coy, don’t you know.

As with many interactions with Gold, barbecue was involved. We wound up at a north suburban Chicago joint with walls adorned in celebrity photos and the wafting aroma of wood-fired Q, as is often the case in the company of great and powerful comic book men.

What I love, perhaps more than anything else about these meals, is how quickly we nerd out. Barely a passing “Hello, how’s so and so” was muttered before the three Unshavens and the two greybeards (can I get away with that? I’ll try it) landed on the minutiae of our beloved pulp heroes and villains. Before we could even be seated we’d begun to ramble on about Supergirl, Suicide Squad, Arrow, Amanda Waller, Avengers: Infinity War, and the Smallville version of Martian Manhunter.

I bowed before the avatar.
He said, “the problem’s clear to me: you never got over Morrissey,” yeah.
I said “well, right you are!”
“It’s so much harder to be underfed than under-understood,” he said.

After we were seated, the conversation veered towards the political. Again, folks in-the-know of our trusted EIC wouldn’t be the least bit surprised. It’s likely not a surprise either, that nary a single point made was in favor of our soon-to-be Reality-Judge-In-Chief. We lamented on the state of the cabinet (“…akin to the Legion of Doom, but likely far more evil than the pulpy counterparts”). We chortled about the two party system (“…it doesn’t work, but then again, neither does anything else”). We commiserated on the power of social media (“…there’s no way in my day folks could assemble as fast”). In between bites of pulled pork, ribs, chicken, and brisket, John and Mike gave me the moment of the evening.

I’m not certain who originated the point, but someone on the Unshaven side of the table asked of our elders if they still had hope – that with enough spirited activism in place our country wouldn’t end up like the fire-pits of Apokolips. Mike and John each paused for a moment and delivered a Chicago-esque Siskel-Ebert take. I won’t tell you who said what (somethings are better left to be discovered), but Gold and Ostrander took different answers. Backed either by the eternal optimism stolen from the 60s that sparked their own original rebellious natures, or rebuked because of the sage wisdom of seeing the world rise and fall enough to believe that pessimism finally stole the day. It was sobering, prophetic, and amazing; and the moment fell as our last entrée plate was taken away.

I went to see KIP WINGER!
He said, “in my day we knew how to party; bands today, c’mon, not hardly.”
He had a back-up singer (doo doo doo doo).
He said, “the metal scene is a disgrace, but I ain’t got no dog in that race!”

When the moment passed, the conversation moved from the sobering to the cynical. The careers of Andy Dick, Rob Schneider, and David Spade were compared and picked over. And true to form, Mike Gold had a personal connection and a story about one of them — likely the other two as well, but by then the server was eyeing our booth for the still-unpaid-bill.

Unshaven picked up the tab (and was sure to extort our dinner guests for future favors, the true way of the comic book business), and the long Jewish Goodbyes began. Thirty minutes later, we parted ways, and the evening ended as brightly as it’d began.

Mike turned to John. “You know, I was just reading a list of the worst movies of 2016, and Suicide Squad was in the top five!” John snickered immediately. “Yeah, well, it made 750 million bucks, so I don’t give a damn.”

Tip of the hat to Harvey Danger’s “Meetings with Remarkable Men (Show Me A Hero)” for the lyrical inspiration this week. If Mike ever lets me program my own guest set on “Weird Sounds Inside the Gold Mind”, that will be how I kick it off.