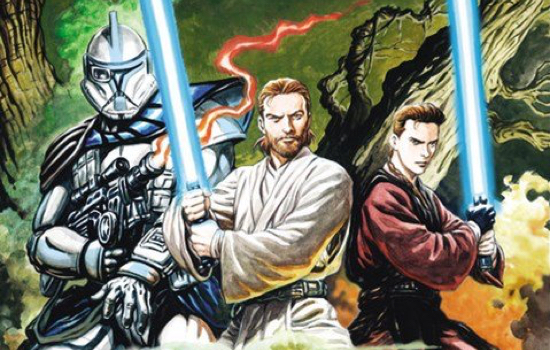 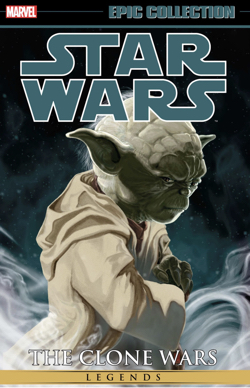 One of the nice perks of being a pro is that the companies send you complimentary copies when they publish your work. Recently, Marvel published another volume of Star Wars Legends that included some of my Star Wars work originally published by Dark Horse. Although no longer considered “canon,” they’re still in print which is cool by me and gives me an excuse to leaf through them and talk a little about the thinking behind them.

Jan and I at the time were the regular team on Star Wars Republic but we left shortly to do a continuing series of oversized bimonthlies under the heading Star Wars: Jedi. Each issue would focus on a given Jedi from the films. We did four of them before going back to the monthly book. While we enjoyed the extra pages of the Jedi series, we liked weaving our storylines in and out with each other and the monthlies provided a better platform for doing that.

We focused a lot on the character of Quinlan Vos, who we had created for our first SW story. Quin was not your usual Jedi – he had been given amnesia, he had troubles with the Dark Side, and could be something of an anti-hero which we would explore even further with Cade Skywalker when we did Star Wars: Legacy. With Quin, we could explore some of the same territory that Anakin Skywalker covered without being tied to one outcome. Everyone knew Anakin fell to the dark side and became Darth Vader but Quin’s fate was undetermined.

I had fun with lots of little touches that show in this volume – I named a character after a good friend, I had prisoners being pressed into service on an impossible mission a la Suicide Squad, and I created a Jedi based on Sean Connery. We called him Shon Kon Ray and he lasted all of one page in Jedi: Shaak Ti before getting blowed up real good. The fans are a sharp bunch and spotted the Connery allusion and, strangely enough, I got a lot of mail and email and chatter lamenting his coming and going so quickly. There was a lot of potential in him, I’ll admit, but that underscored the reality of war, even one as unreal as the Clone Wars. Characters/people that you liked, even if meeting them only briefly, suddenly died.

That also underscores one of the questions and themes that ran through almost all of the stories that Jan and I did in this volume. Are the Jedi on the wrong side in this war? It’s a given that the Republic is corrupt. The Jedi themselves are meant to be peacekeepers and in the Clone wars they are dragooned into being generals. They are supposed to revere life above all and yet they send soldiers to their deaths. War being war, innocents suffer and there is a lot of destruction. In every story, someone who is a Jedi wonders what the Order is doing.

In the Mace Windu story, Samuel L. Jackson. . .err, Mace Windu. . . rationalizes that the Jedi support the principles on which the Republic was formed and not what it’s become. But that is debatable and, in the Count Dooku issue, the Count challenges the notion. Dooku, of course, is a Sith and the Sith are playing both sides against one another in order to weaken and destroy the Jedi. The Republic ultimately votes to transform itself into an Empire and a Sith becomes the Emperor.

When you get right down to it, it’s all rather dark and I found the stories in this volume perhaps more suited for this age than the one in which it was written. I claim no foresight; it was simply a question I felt worth exploring. Can you be a hero if you fight for something that is wrong?

That’s a question still worth exploring.