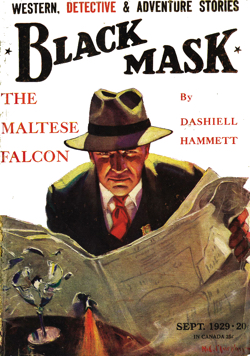 Now as I was young and easy and gentlemen still trod the Earth and politics still made sense (a little… sometimes) I held that private eye fiction was about righteous men who had the courage to be alone. I was, at the time, living by myself in a small Manhattan apartment and so I guess I was seeking identification with heroes (and maybe seeking an excuse for my isolation.) But I was, I now think, wrong.

Which fictional gumshoes did I have in mind? My two favorites were Dashiell Hammett’s Sam Spade and Raymond Chandler’s Philip Marlowe and they were, indeed, solitary beings walking the mean streets seeking truth. And there were others sprinkled through the pop culture regions of pulp magazines, radio, B movies. (Comic books? Patience, please, we’ll get to them.)

If you’re looking for antecedents, cast a glance at the King Arthur stories. Arthur’s knights mostly roved without companionship on their quests for the holy grail or whatever. But they did have a whole posse of clanky buddies waiting for their return at that round table, not to mention the odd fair maiden.

And from the very beginning of detective fiction, the heroes often had assistants, sidekicks, companions, homies – you pick the terminology – and these did a lot more than wait at home for the questers return. Edgar Allen Poe published the first private eye story way back in 1841. His hero was not a cop; he was a gifted amateur sleuth and here Poe established a much-imitated prototype, and not the only one. His good guy was a Gallic dilettante named C. Auguste Dupin whose exploits were related by an anonymous narrator whose name Poe did not share… and a mere 46 years later behold! 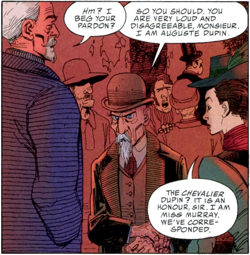 Dr. John Watson delighting us with the wizardry of his roommate and constant companion, the world’s first “consulting detective” and by now you know that I refer to the master, Sherlock Holmes. Then, a lot of others, some lone wolves, some with healthier social lives.

Comics have not been congenial hosts to the consulting detective crowd..There have been a few, including a pre-Superman toughie named Slam Bradley who, by the way, had a sidekick, Shorty Morgan. Slam was created by Jerry Siegel and Joe Shuster, the team much better known for Superman.

Superman did not have on-the-job companionship, at least not in his early days, when he was supposed to be the only survivor of a doomed planet. (That changed. Considerably.) But Batman, the character Superman’s publisher commissioned to repeat his success, though originally a loner, had, within 11 months of his debut, an official assistant, Robin The Boy Wonder. Costumed vigilantes thereafter often came equipped with young acolytes.

And that brings us to now. These days, the superheroic genre is evolving a new paradigm. There is a kind of boss hero and several attractive helpers who take an active part in the quelling of antagonists. They aren’t gathering dust at that stupid table, they’re doing stuff! This, I think, is to accommodate the needs of television, which reaches a much bigger audience than print media ever did , specifically, a certain demographic, millennials old enough to have disposable income and young enough to identify with having lots of friends and getting involved with romances and disapproving parents and such woes. Of the five comics-derived weekly shows, only Gotham violates this pattern; its creators are going with the earlier Holmes-Watson template.

And say! Did you hear about Sherlock’s girlfriend? Elly Mentary?