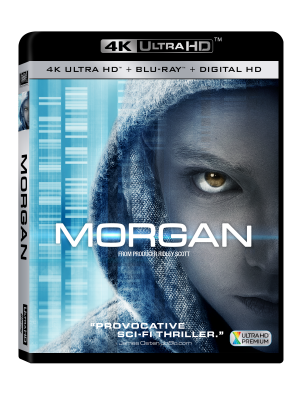 There’s something about the fall and the beginning of the school year that forces us to crave weightier matters. Popcorn nonsense like Independence Day Resurgence makes way for more thoughtful science fiction fare. While a lot of attention was devoted to the serious Arrival, there was another offering that had some strong themes undercut by weak execution.

From producer Ridley Scott came Morgan, out this week from 20th Century Home Entertainment. The film, starring Kate Mara, Michelle Yeoh, Toby Jones, and Paul Giamatti, came and went in a blink so don’t be surprised you don’t recall it.

Today, in our world, scientists are actively growing organs and meat in test tubes, perfecting the process before unleashing their work on society. In Morgan, things have progressed much further, having developed Morgan (Anya Taylor-Joy) in an isolated lab. Coming to check it out is corporate risk assessor Lee Weathers (Kate Mara) and as she speaks with Dr. Lui Cheng (Michelle Yeoh) and Dr. Simon Ziegler (Toby Jones), the moral and ethical issues of their work is up for debate.

Lee and Morgan spend a lot of time together, as the human tires to determine if the five year old lab experiment is a good thing or not. Dr. Alan Shapiro (Paul Giamatti) is also brought in to probe it, not her, and he asks a lot of questions without following what appears to be proper lab protocols for an experiment. He delves deep and given that it’s Giamatti asking the aggressive questions, it’s done with verve. He and Taylor-Joy, she of the large, expressive eyes, do a great job together, giving us all issues to chew over.

Many of these themes came up last year in the superior Ex Machina, but given how close this issue is coming to fruition, we should have having these debates with regularity. Starting in our entertaining makes the most sense since news pieces on this topic normally would be glossed over or more easily ignored.

Of course it’s not all talk as Morgan snaps and becomes a threat, attacking Kathy (Jennifer Jason Leigh), maiming the aide, thus summoning Lee to investigate.

If only the Seth Owen’s story were better crafter and weak characterization and pacing made more sense. Scott’s son, Luke, makes his directorial debut here and between the two, they should have recognized these weaknesses and addressed them. The twist at the end is fairly clear to those paying attention but here, Luke Scott pulls it off nicely.

The high definition transfer looks just fine and is well matched with the audio.

There are handful of special features, the best of which is Modified Organism: The Science Behind Morgan, with a good look at the real world issues the film addresses. There are some Deleted Scenes, a mildly interesting Audio Commentary from Luke Scott; his short film Loom (complete with a commentary track, and a Still Gallery.