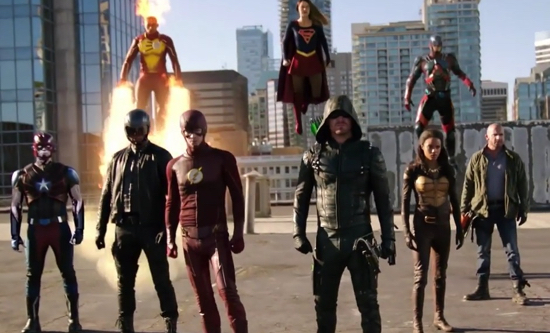 There you are, somewhen on the far side of one of these bedeviling time gaps, at least four days in the future from when I’m typing this and – I don’t really know – you just might be squirming with anticipation because in a few hours or less – your hours – you’ll be watching the final part of the season’s megaevent, the four-part television crossover featuring Supergirl, The Flash, Green Arrow and the members of DC’s Legends of Tomorrow.

Is your breath taken?

Me, I’m sitting here in Monday afternoon, not knowing what the crossover is even about. (Of course, it’ll be in some way about the heroes mentioned in the previous 81 word! paragraph.)

So, again, tv is following behind comic books. Not a knock on the video guys: comics got there first because high speed printing was invented before video transmission – the first steam driven press debuted way back in 1825 and there’s your trivia of the day – and although television technology and print technology are vastly different, they are both what Stephen King calls story delivery systems and in that capacity deal with some of the same problems.

Among those problems: making lots of money from fictional characters. One answer occurred to mass audience storytellers when very few people had ever seen a television set and comics were in their infancy: have characters from one popular publication appear in another publication. A publisher could hope that the crossover stunt would expose readers of one magazine to the other magazine and the newbies would become regulars. So went the hope.

The ancestors of today’s two biggest comics companies were the first publishers to do the big crossover thing. (I’ll call that a coincidence if you will.) What became DC comics gave us All-Star Comics, which featured the company’s most popular heroes, and some maybe not so popular, joining together to solve various humdingers of crises and what became Marvel Comics put their Submariner in the same adventure with their Human Torch. All this in 1940, just before World War Two.

And so crossovers joined comics publishing’s tool kit and they’ve been appearing ever since.

In 1927 – yeah, that early – television was presented to the world but it took another 20 years, give or take, for the tube to start being a household fixture. Television, like comics before it, had to deliver exciting entertainment every week using the same set of characters while being careful not to kill them. Like comics. I’d like to say that it was inevitable that screen drama would start crossing over, especially since a lot of the material began as comics stories. But what do I know from inevitable? It happened and thus it’s reality and reality always trumps everything else.

Did I just use a naughty word?