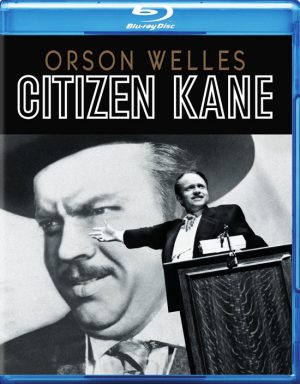 The American Dream, a term coined in 1931, essentially says that for any citizen, the possibilities for success are limitless if you work hard. That ethic was reinforced last week and today as Warner Home Entertainment releases a 75th Anniversary edition of Citizen Kane.

Orson Welles was a wunderkind, harnessing his many talents for the radio, scaring the beejezus out of the country with his adaptation of H.G. Wells’ War of the Worlds. With his ensemble, dubbed the Mercury Players, he was a powerhouse entertaining so it was no wonder he was enticed west to try his hand at film.

At 25, he cowrote, produced, directed, and starred in the story that was inspired by publishing magnate William Randolph Hearst, tracing the humble beginnings and rise then spectacular fall of a great man. It was a riveting portrait of a man in search of happiness, seeking pleasure in fame, fortune, and feminine companionship, failing time and again. He parlayed his fame into a run for governor, speaking truth to power, challenging the political machine of the day – sound familiar? – until the machine bit back and the dream faded. This is one of the first mass media productions to explore how the medium can be used to manipulate public opinion.

As a filmmaker, Welles attempted things that few other directors seemed interested in. He played with story structure, starting with Kane’s death, using a news reel to relay the vital facts, before a reporter investigated further, attempting to understand his final word, “rosebud”. We meet the great and small people who encountered Kane and their flashbacks tell the real story.

Visually, Welles was the first to combine a variety of techniques already in use by German directors — deep focus cinematography, shots of the ceilings, chiaroscuro lighting, and temporal jump-cuts – into an American production. He claims he did this through ignorance of the rules, much as Kane wrote his own rules along the way. Welles also brought his radio know-how to the screen, so overlapping dialogue and sound effects deepened the film experience.

The movie was a success, and one of the few to enjoy 100% fresh at Rotten Tomatoes. It has withstood the test of time, staying atop AFI’s Greatest Films of All Time list. The virtuoso production, which gave us actors such as Joseph Cotton and Agnes Moorehead, endures because of its themes and rock solid production. It forces you to watch, to pay attention, and understand one of the most complex figures introduced during Hollywood’s Golden Age.

It remains watchable and entertaining, such is its power. Warner has remastered the film, previously released in DVD and Blu-ray, in 4K resolution, making for the 1080p 1.33:1image even sharper image on Blu-ray players. The audio is DTS-HD Master Audio is superb.

The 70th Anniversary box set remains the best package overall with the bonus material included but this Blu-ray still comes with many previously released features such as separate commentaries from Roger Ebert and Peter Bogdonavich, Turner Archive Project interviews with actress Ruth Warwick and film editor Robert Wise, Opening: World Premiere of Citizen Kane, and “The Production,” a 15-minute onscreen slideshow with contextual commentary from Ebert.

If you have never seen this, now is the time. Its lessons and entertainment value cannot be overstated.