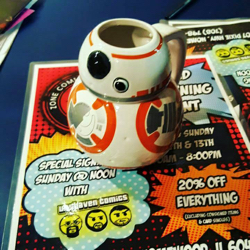 For those of you who follow my life religiously, you’ll recall there was a time where I considered owning my own comics shop. In the end, I’d determined the barriers to entry and risk of the business was too rich for my blood. But I held out hope that soon, someone more willing than I would take the reins.

My prayers were answered, and to my delighted surprise the new proprietor reached out to me via Facebook to e-introduce himself and to welcome Unshaven Comics back to the Zone Comics and Games, 18107 Dixie Highway in Homewood, Illinois. And there was much rejoicing!

Across several conversations that followed the new owner was truly interested in partnering with my studio in as many ways as we could both conceive, beginning with inviting us to the grand re-opening (we’ll be signing tomorrow at noon in case you’re making the trek out!). Discussions of future workshops are on our collected docket. And to seal the deal with commerce, The Zone went ahead and placed the single largest order of books my little studio has ever seen. 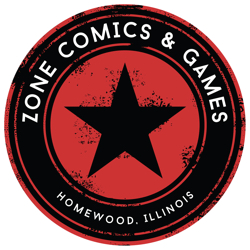 Now, don’t get me wrong: to date we’ve only sold to individuals at conventions. We’ve long contemplated branching out to distribute to stores around our great city. But without a full series to sell (and time between books that is… well… sad), it never seemed appropriate for me to chase down retailers to have them shelve books that their customers couldn’t be sure to return for the next chapter of, the next week. It’s bad business for them, and us. But the Zone has the benefit of us being right in town. So, they’ll push our wares, no matter the time gaps between issues.

With all this support, I kvelved at the notion that finally Unshaven Comics would be considered the comic makers of our tiny burg. While a solid set of kids may know of us from our appearances at local and less-local comic-cons, now we’ll be placed on the front counter in a special display, telling kids that “Yes, some cool dudes in this town are making awesome books!”. It’s given me a feeling of pride that I’ve truly never felt before. Combine this with our recent partnership with our local Parks & Recreation department to offer a “Comic Book Making 101” class in the winter, and 2017 is shaping up to be a rather Unshaven Year.

But this leads me to my titular conundrum. You see, I’m not just a maker of comics. I, too, am a consumer. As such, my recent return to buying books monthly lead me to do business with my friends at Past Times Comics and Games in not-so-nearby Niles, Illinois. I shop with them because their manager is a long trusted friend whose original shop was the one where Unshaven first sold a book. I am loyal to a fault, and Past Times has served me wonderfully.

But now, oy, my heart aches. For you see the Zone now has me wondering how to support my comic buying habit as means of supporting their newfound life. After careful consideration? I’ve come up with a plan I think is quite worthy.

I will shop at both stores. From the Zone, I will procure the mainstream brik-a-brak that I’m presently enjoying (The Flash, Green Lanterns, Batman, Captain America, and Titans). From Past Times? I’ve concocted a truly interesting idea. I’ve given them carte blanche to create a package of books for me monthly — totaling no more than $20, and compromised of only non-mainstream books (Image counts. Vertigo, too. Essentially, as I’d told my pal: Just no capes I’d already know.) This way, I win and win again. My local shop will see monthly revenue for my guilty pleasures. My former shop — complete with my trust and blessings — will provide me new windows into the medium which will in turn help me provide new and interesting things to talk about here on ComicMix. As Michael Scott would say, that’s a win-win-win.

Your local comic shop needs the same amount of love. In a world of Lootcrates and the like, local businesses are forces to splinter and bend to the whim of a continually finicky consumer. To be the shop is to be the hub for the non-jocks. In our world where Doctor Strange mints over 90 million dollars domestically, the time to be a nerd has never been better. Our hometown pulp and paper slingers need to be at the center of our nerdy lives.

I’m now doing my part. How about you?