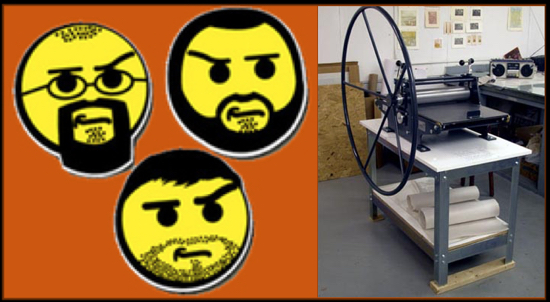 This past week, Unshaven Comics was once again given the most sincere and polite brush off from a show promoter to be a part of the Artist Alley. The show was ReedPop’s C2E2, in Chicago.

For the record: Unshaven Comics has never missed exhibiting at this show. We consider it our home show. But a few years back, we were denied access to the part of the floor where we feel the most comfortable. We were faced with a hard choice — pay over twice the cost to have a table in the Small Press area, or forgo the show. We bit the bullet. We sold our beards off. And we still made profit.

For the record, Unshaven Comics is not a small press company in my estimation. We’re a studio that produces a single book, penalized for having the gall to want to share a single 8-foot table.

I’m not going to lie: I’ve been bitter ever since. Bitter still now, the third year in a row I have cut a check for a larger sum of money than I’d like, to ensure our localish fans know we still are alive and well.

Am I mad at the promoter, ReedPop? No. I don’t even fear repercussions for posting this op-ed. Reed isn’t concerned about the comings and goings of a speck of dust on the outskirts of the indie comic market. For as much as I’d like to inflate my resume of comic bookery, the simple truth is if Unshaven turned off the lights in the studio tomorrow maybe a few dozen people would really notice. I’m not saying this for pity. I’m just well-aware of the beast we’re trying to slay. In the land of content, he who can only produce (at best) a book a year, is not high in demand.

ReedPop, as all show promoters, are in business to do one thing: get butts in a building, spending wads of cash. And with the advent of on-demand printing, digital publishing, and affordable content creation tools out there, the industry feels choked to the nines with creators all vying for the same spaces. Granted, some of these artists are just trying for a quick smash-and-grab, applying a few filters and a few simple style choices to produce a litany of printed kitsch meant to attract the lowest common denominator. This is a topic for a whole other piece.

At the end of the day, show promoters must choose from those who apply for their space who will best attract those aforementioned butts. Whatever their selection process may be, Unshaven Comics must adhere to the same application rules as literally every other artist in line. Whatever boxes we check or don’t check off is all in the eye of the beholder. But this article isn’t really in defense of those choices. I am not a show-promoter. I know some amazing show-promoters. They have an unenviable job in my humblest of estimations. I write this week to tell you honestly how it feels to be told we’re not good enough.

But before I do, let me dog-pile on the pity party. C2E2’s rejection of Unshaven for their Alley wasn’t the least bit surprising to me. Since we’ve upgraded to the small press area the last few years, I believe we’re earmarked as suckers who they know will pay… and so we pay. And we still make it work. So it goes. It’s the combination of their rejection compounded on being recently turned away on a pair of smaller local shows that really shook me more than I’d honestly thought they would.

To hear from shows that are in my backyard declining to offer my studio a spot while I see literally dozens of my friends and colleagues being welcomed as guests of honor leaves me feeling truly rejected. On the precipice of finishing the final chapter in our Samurnauts mini-series (seriously… it’s being colored right now. We’re so close I can almost taste it.), 2017 is a do-or-die year for me and my bearded brethren. Every show counts. Every show is an opportunity to declare victory over a beast that has taken five years to slay. And to be told we’re not good enough, while our friends are lauded with social media call-outs is a gut punch I’m finding hard to shake off.

We have an amazing fan base. That I can include people like Mike Gold, Martha Thomases, John Ostrander, and Glenn Hauman amongst them is one of those little factoids that keep my heart beating and pen moving every night. That we still have fans — strangers met at conventions who have purchased our wares and continue to support us — clamoring for Unshaven to continue to fight our way into any show that will have us? Well, it’s the lit matches I’ll continue to use every time our fire begins to dim.

And I know right now, this article may be reaching any number of compatriots in the exact same boat as my little production house. Talented, driven creators being denied access to tens of thousands of potential customers… all so the guy who just sells posters of cheesecake pinups or indie darlings whose ‘zines aren’t worth the artisanal rice paper they’re printed on can hock their wares next to the same standby medium-famous artists and celebrities that are always there. Well, to you, I say be bitter with me.

We live in a gilded age, whether you believe it or not. There are more cons out there now than ever before. So, if ReedPop says no, so be it. Take the anger and the money you would have dropped on that show and find another. And another. Take your books to the local comic shop, and offer to do a signing. Do anime shows. Book shows. Craft fairs. Flea markets. Go anywhere and everywhere. And keep making your comics and art. The more you produce, the better you’ll become. The better you become, the better your product. And eventually, the better your product, the more people will notice. Those people have butts. And those butts wind up walking into big shows. And with that…

…you just might be see the acceptance you deserve. If you don’t believe me, be my guest and quit. More room for Unshaven Comics.