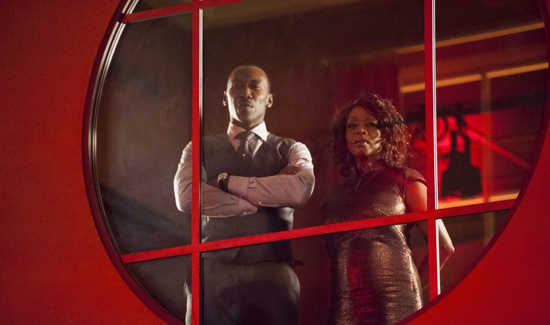 Of the many shows I’ve consumed as of late, two spring to the front of my mind when I want to spice up dinner conversation: Marvel’s Luke Cage, and FX’s Atlanta. They are a yin and yang both birthed from the peanut-butter-chocolate combination that is nerd and black Americans. One show is about a noble black man granted the superhuman ability to rise above white hate. The other is about a loser just trying to get a win in a world built to see him fail. What unites both shows is the through-line of Black America.

Each show is intrepid in its fascination, celebration, exploitation, and segregation of the African-American experience in today’s Trumped-Up United States. Each show on its own is solid, thought-provoking at times, and flawed in their details. Taken as a pair,they become something astounding. At their core, neither could exist without black being right at the forefront.

I’ll spare you my snarky synopsis of each show. Suffice to say you’d be doing yourself a disservice if you choose to ignore either. Cage is on Netflix. Borrow your cousin’s login. Atlanta is on FX. So, in a month or two it’ll be on Hulu. Borrow your other cousin’s login for that one too, I suppose.

With Luke Cage, I freely admit my desire to enjoy it came solely on the knowledge that it was birthed from pulpy roots. I knew little to nothing of the character. Luke works with Iron Fist. He’s got impenetrable skin. He used to dress like a pirate princess. Now he’s a yellow shirted black Stone Cold Steve Austin. Jessica Jones had (has?) his baby. Yup. That’s literally everything I knew of the character. Based on the pedigree of Daredevil and Jessica Jones (vis a vis Netflix) though, I knew Cage would be a quality watch. What I didn’t count on was (as many on my feeds commented on as well) the show actually being about Harlem and the black experience… not just a strong black dude fighting super villains.

With Atlanta, I ensured my series record on the ole’ DVR based solely on my appreciation for all things Donald Glover. And for those following along? This is yet another time I’m eating my own words. Where I once lambasted Glover for being angtsy, it was shortly after writing that article I found myself accidently in love with Because the Internet. The former ensemble cast member of the cult-favorite Community became a near-daily listened-to recording artist on my Spotify playlists for his work as Childish Gambino. Glover on the mic is pensive and egotistical in the same breath. His beats – which some truer rap fans than I lambast him for cribbing from more popular nerdcore artists – are slick interplays of techno-screeches, dub-step-warble, and delightful shoegaze. To think that guy would choose to pen “Twin Peaks, with rappers” as an episodic dramedy sounded like a match made in heaven for my mind. Never mind that I considered whatever that output was going to be, was ever going to be… purposefully black.

While the shows contrast in their nature – one acting as a literal homage and elevation to Blaxsploitation, the other acting an arthouse flick spiraling out somewhere between a serial and anthology – they both share a love of microscopic explorations of black culture as means to build their narratives around.

In Cage, we got a well-read, black-culture-versed hero who is enthralled about authors like Walter Mosley and Ralph Ellison. And while he could jaw a bit with Method Man about his favorite Wu Tang Clan album, the series was sure to celebrate the breadth of black music – from Raphael Saadiq, Faith Evans, straight to legends like The Delfonics and Sharon Jones and the Dap-Kings. With Pop’s Barbershop as the “neighborhood Switzerland,” we got a central part of modern black culture woven straight into the fabric of the series. And while not every character on the show was given depth… even background players like Bobby Fish and Turk were allowed to show how they worked to provide for their own through the seedy underbelly of Harlem Luke Cage would be coerced to protect by season’s end.

Atlanta’s black America is far less united in history and shared gravitas. The Big Peach of Glover’s pen is dissected across multiple social strata. Glover’s character, Earn, is a burnout trying to burn less; lending managerial services to his mix-tape slinging cousin. Through the lens of the local rap-scene, we see how Earn and Paper Boi are celebrated by some, loathed by others, obsessed on by posers, and ignored by the players. Throughout the season Earn and those in his orbit wind up in a litany of stereotypical black locales – a BET inspired Charlie Rose interview show, a high-society Southern Gothic ball, the city lock-up, and the backwoods of Georgia for some illicit drug deals. In Atlanta, there are no super heroes to save the day, just the stub of a blunt or a bong made from an apple.

A visit to a dance club in the show is antithetical to Luke Cage’s Harlem’s Paradise. Where Paradise is all class, the club in Atlanta is hot ass. A barely-seen more-famous-rapper keeps a bevvy of hangers’ on in his private VIP section while Paper Boi remains in his self-proclaimed Oktoberfest (a joke so deft, I paused to relish it). When gun shots eventually erupt at both clubs, Cage is at the center of the action to protect and defend. Earn and his cousin duck, run, and get late-night-breakfast. That Paper Boi would then be announced as a potential suspect (when he was far away from the action) serves as a tongue-in-cheek reference to the modern victimization of innocent black men and women. Earn and Paper Boi see the story, snicker, and go back to their waffles.

In both cases I found a window to a world I’m often purposefully excluded from. That both shows do so well to feel lived in without feeling like purged-pandering is a testament to the niche media worlds we’re enjoying on modern TV. I’ve never been more excited for the future.