“Star Trek Beyond” gets the Mondo Poster Treatment 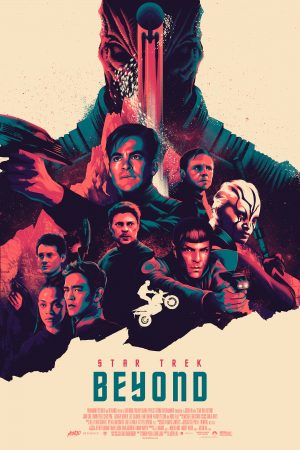 Star Trek Beyond, Paramount Pictures’ third installment in the rebooted series, has received a poster from Mondo, executed by artist Matt Taylor to celebrate the Digital HD and Blu-ray release of the film, which came out this week.

This limited edition poster is not for sale so fans will have to look for contests or other opportunities to acquire a copy. ComicMix was provided with one, which will be auctioned off for charity at Farpoint in February 2017.

Star Trek Beyond, starring Chris Pine and Zachary Quinto, was directed by Justin Lin and was critically acclaimed as a much needed course correction after the disastrous Star Trek Into Darkness. The $185 million production underperformed at the box office although a fourth film in the series has already been announced, with Chris Hemsworth returning as George Kirk, father to Pine’s James T, Kirk. No screenwriters, director, or other details have been released. With Anton Yelchin’s tragic death, it is expected to have Chekov not be recast but removed the Enterprise crew. At the earliest, fans should expect this film to be released in 2019, following the three to four year pattern since the 2009 Star Trek from director J.J. Abrams, was released.