Meet the Fearsome Foursome who Challenge the Caped Crusaders 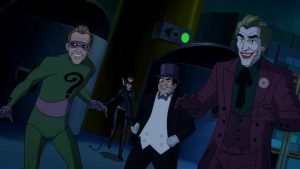 The spotlight shines on far more than the core trio of iconic stars of Batman: Return of the Caped Crusaders. With the likes of primetime television veterans Steven Weber and Thomas Lennon leading the way, the full-length animated feature film boasts a supporting cast of notable voices from across all entertainment mediums and some of the best-loved animated properties.

Adam West (Batman), Burt Ward (Robin) and Julie Newmar (Catwoman) own top billing, but Weber (Wings, iZombie, NCIS: New Orleans) and Lennon (The Odd Couple, Reno 911!) – as trustworthy butler Alfred Pennyworth and Chief O’Hara, respectively – headline an impressive array of actors who were excited to give voice to a role in a Batman film. 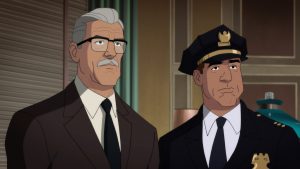 In addition to Weber and Lennon, the cast includes: 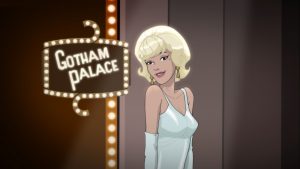 Produced by Warner Bros. Animation and DC Entertainment, Batman: Return of the Caped Crusaders comes to movie theaters for three exclusive showings on Monday, October 10 at 2:00 p.m., 7:30 p.m. and 10:00 p.m. local time. The following day – Tuesday, October 11 – the film will be available to own on Digital HD, and then Batman: Return of the Caped Crusaders arrives November 1 from Warner Bros. Home Entertainment on Blu-ray™ Combo Pack and DVD.

In addition, Warner Bros. Home Entertainment will host the World Premiere of Batman: Return of the Caped Crusaders this Thursday, October 6 at New York Comic Con. 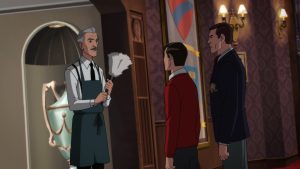 It’s back to the 1960s as Batman and Robin spring into action when Gotham City is threatened by a quartet of Batman’s most fiendish foes – Penguin, The Joker, Riddler and Catwoman. The four Super-Villains have combined their wicked talents to hatch a plot so nefarious that the Dynamic Duo will need to go to outer space (and back) to foil their arch enemies and restore order in Gotham City. It’s a truly fantastic adventure that will pit good against evil, good against good, evil against evil … and feature two words that exponentially raise the stakes for both sides: Replicator Ray. Holy Multiplication Tables!