Dennis O’Neil: Superman – What Do We Really Know? 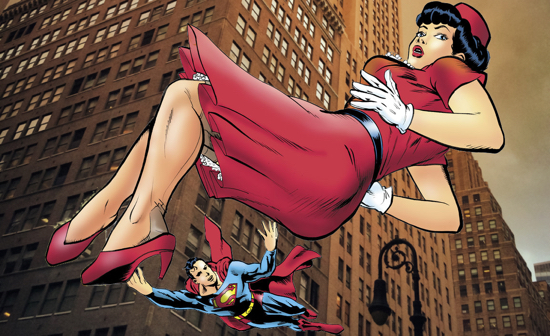 “Someone has just thrown Lois Lane from an airplane and she’s plummeting Earthward. But today is Humtyglumf Day, the most sacred day in the Kryptonian calendar – a day on which it is absolutely forbidden to rescue falling females. But if I do nothing, in about a nanosecond Lois will squish…”

Full disclosure: I don’t really know if Kryptonians celebrate Humptyglumf Day. On the other hand, I don’t really know if they don’t. Superman seems to have a lot of information about his shattered home world – he seems to knows a lot more about Krypton than I know about, oh…McCausland Avenue where, I have it on reliable authority, I spend the first four years or so of my life. But nothing about politics or religion.

The profit motive partly explains this. I’m thinking of one of my favorite novelists, now deceased. His name was John D. MacDonald and his best known character was/is Travis McGee. McDonald and McGee were, for me, buy-immediately-upon-sighting as I checked out the fresh paperbacks. I don’t know how many McGee novels I read before I realized how little I really knew about our hero. McDonald gave us what seemed to be a heap of personal data about his creation – his friends, his houseboat, his car, his workouts, his opinions of certain cities, his party-timing, all this and more well covered. Yessir, after reading two or five of the books you knew ol’ Trav. But did you? Tell me about his parents, his siblings (isn’t a brother mentioned somewhere?), his home town, the schools he attended, his political preferences, where, if anywhere, he worships…You might be tight with Trav, but you couldn’t fill out his census questionnaire.

I think what McDonald was doing, consciously or not, was employing a bit of literary legerdemain – what Penn and Teller might call “misdirection.” He gives you lots of detail and maybe you don’t notice that he withholds anything that is crucial – anything that might prejudice you against the character. (You don’t like Presbyterians? Well, he’s no Presbyterian!) It’s fair to say that most, if not all, writers of mass-consumption worked a similar dodge. The radio programs and television shows and movies were populated by…well, Americans! Probably ate white bread. Probably went to church (though which church we didn’t have to know.) Probably voted. (But which lever they turned is really none of our concern.)

Comic books? Let’s see…there’s Clark Kent and Bruce Wayne and Peter Parker and Tony Stark and Steve Rogers…Nope – not an ethnic name in a truckload. And none of these guys have lapel pins indicating political preference, either.

I can’t decide if this pop culture homogenization has been helpful or harmful to the general welfare. Maybe a bit of both? I have a hunch that its time is almost past, but that’s not today’s topic. Nor is Humptyglumf Day.