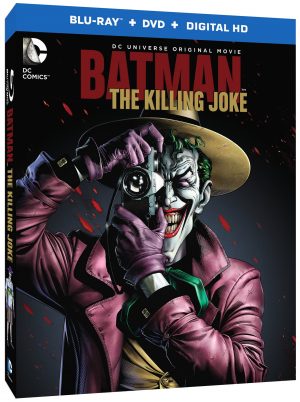 In 1984 (or thereabouts) Alan Moore was asked to write a Batman one-shot for artist Brian Bolland. Between the arrival of the script and the publication of the Prestige Format Batman: The Killing Joke, Moore went on to become the most popular and best-selling comics writer of the decade. One of the reasons was that unlike his peers, he dug deeply into what made the heroes and villains tick and how they related to one another.

As a result of the strong writing and the brilliant artwork, the one-shot went on to become an acclaimed title that has remained in print ever since. Its little surprise, then, that Warner Animation finally turned their attention to adapting it for their direct-to-video line of films. They sparred little expense, bringing in crime writer Brian Azzarello and reuniting the popular Batman: The Animated Series vocal duo of Kevin Conroy and Mark Hamill. Warner even let them adapt without regard to ratings and thus we have the first R-rated animated film from the studio.

I just wish it was good.

The film is really two separate stories, the second of which was the adaptation. Adapting 48 pages means there’s a lot of time left for the usual 77 minute production. Since the inciting incident is the Joker’s shooting of Barbara Gordon (Tara Strong), it made sense to reintroduce viewers to Babs and her Batgirl alter ego. Here, Azzarello displays a rather poor understanding of heroism or women.

As depicted here, Barbara has been Batman’s partner for three years. No mention of a Robin or other players. She clumsily allows an armored car robbery slip through her fingers, but not before she caught the fancy of the one of the criminals, “Paris Franz” (Maury Sterling). He somehow gets under her skin, forces her to make mistakes and earns Batman’s ire until he tells her to stay away. She, of course, can’t. The first problem is that Franz is not at all charismatic or interesting so the attraction makes little sense. More importantly, she’s acting like a rookie not a veteran. 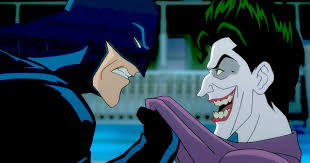 There’s little heroic about her actions, little sympathy established for her character which is vital for what is to come. Worse, Azzarello decides that the one thing she initiates is having sex with Batman, in public, ripping her clothes off to take him right then and there. Not a great message being sent to the female audience.

For some reason, this has been her last case and in the meantime, Batman decides he needs to go pay the joker a visit, saying he’s been thinking about their relationship. It’d be nice if something in the first half of the film actually led us to this moment. And from there, we’re off and running.

As an adaptation it’s fine if uninspired. Why they decided to stick a song and dance number in the middle of James Gordon’s psychological torture is one of those imponderables. Yes, it’s violent, and the sexually abuse the comic alluded to is hinted at here.

But, in the end, it’s cold and not as involving as the source material and that’s a disappointment. 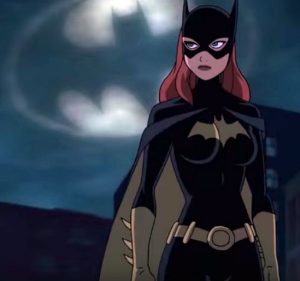 The Blu-ray, DVD, and Digital HD combo pack is out from Warner Home Entertainment this week and the 1080p, AVC-encoded Blu-ray is just fine to watch. The DTS-HD MA 5.1 let’s us enjoy Composers Kristopher Carter, Michael McCuistion and Lolita Ritmanis effective score.

The Special Features are pretty standard including a handful of contemporary trailers and the usual Sneak Peek at DC Universe’s Next Animated Movie (8:14), which is the eagerly anticipated Justice League Dark.

There are just two featurettes, the first being Madness Set to Music (11:54) where the composers and other talking heads extol the freedom of working on the story. The trio had previously worked on the musical episode of Batman: The Brave and the Bold and they have clear affection for the medium.

Mike Carlin, Dan DiDio, and assorted others chime in on Batman: The Killing Joke: The Many Sides of the Joker (17:43), which should have offered up a better chronology since his first appearance in 1940 but uses lovely examples of his appearances throughout the years. Some attention should have been paid to the filmed versions of the Clown Prince of Crime from Cesar Romero to Jack Nicholson and even Jared Leto. Ah well.

Finally, From the DC Comics Vault offers up Batman: The Animated Series: “Christmas with the Joker” (22:26) and The New Batman Adventures: “Old Wounds” (21:11) which are nice to see but feel out of place given the tonality of the main feature.