Mike Gold: Muhammad Ali… and Me?

I had a close friend and brother-in-arms named Larry Schlam, an attorney who specialized in juvenile rights. He later became a law professor and a lecturer on that same issue. He had been a doo-wop singer in Brooklyn, but that has no relevance to this topic. As it comes to us all, Larry died last year. 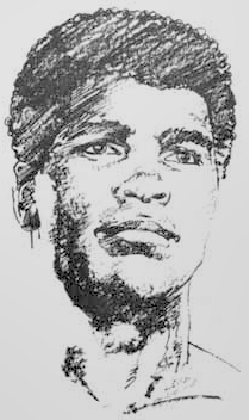 Back in 1971 or 1972, I was with Larry at his office in downtown Chicago. We were working late – to the extent that we were actually working – and I left around 10 PM. As I walked towards the elevators, I saw one about to close and, like many late-evening neurotics, I was convinced that was the last elevator for the night. I shouted “Please hold the elevator!” and a giant mitt popped out to hold the door open. I trotted into the booth, turned to thank my benefactor, and found myself face-to-face with Muhammad Ali.

I did a double-take that might have impressed Moe Howard. Ali let out a gut-level laugh, flashing that famous smile. I thanked him – I think in some version of English – and mumbled something about inspiration. He thanked me. It wasn’t the longest elevator ride in history, and I would have paid good money if the machine got stuck for an hour or two.

As it happened, Ali was in the building to meet with his lawyer, whose office happened to be next door to Larry’s. I had met the lawyer several times; this will become significant in a few paragraphs.

Like many baby boomers, perhaps most, to me Muhammad Ali wasn’t merely a boxer and a political activist and a humanitarian. Muhammad Ali was a legend, a living super-hero whose costume was a pair of Everlast shorts and two bulbous, cartoon-like gloves. That’s all he needed. Shortly after he became the youngest American to win the heavyweight title I read he often worked out at a gym on East 63rd Street, near the bank that held my family’s account. Every time I went there (admittedly, not all that often – protohippies didn’t have a lot of money) I would gawk up and down the street on the off-chance I could catch a glimpse of The Champ. Sadly, that didn’t happen until the elevator incident.

We now flash forward to 1978. I was on staff at DC Comics and we were about to release Denny O’Neil and Neal Adams’ Superman Vs. Muhammad Ali. Part of my job was to publicize the book, and like most publicists I was trying to think up a gimmick. Ali was globally known as a man who could out-talk a Dexedrine fiend. The proverbial light bulb lit up over my head, and I called Larry Schlam and asked him to put me in touch with Ali’s lawyer.

I discussed my planned stunt and he was all in favor, and he added a few bells and whistles of his own. He also added the obvious admonition that The Champ might not agree or, if he did, he could change his mind right there at the press conference. Que sera, sera, as both Doris Day and Sly and the Family Stone used to sing. 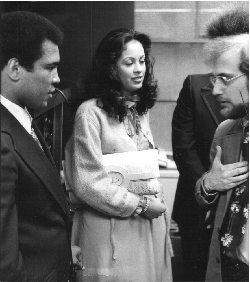 Still, I was concerned the idea might tank, so I didn’t tell anybody. Not my faithful assistant Mike Catron, not my boss Jenette Kahn nor my co-boss Sol Harrison. As it turned out, Ali had sort of mentioned it to Jenette the evening before, but aside from that the only person who knew about it was celebrity columnist Irv Kupcinet, who stood ready to break the “exclusive” the moment it happened. That’s how you did it in the pre-Internet days.

The press conference was held at the massive Time-Life auditorium, which was filled with reporters, microphones and camera crews. We started the show with Jenette introducing The Champ… and not a single camera crew had their lights on. Jenette was, and certainly remains, an extremely photogenic person but they weren’t there to record her comments. They were there for Muhammad Ali.

When Ali took the microphone, the reporters started shouting out questions about his upcoming fight. And, for the first time ever in recorded history, the man who was called a blabbermouth (with good reason) about as often as he was called a boxer… refused to comment about that upcoming fight with Leon Spinks! This incited the press all the more, and they would not let up. Ali picked up our oversized comic book and said that was the only reason he was there.

He also said he hadn’t read it. That set off my “Oh-Oh” sense (thank you, Len Wein), but the press couldn’t care less. The headline was “Muhammad Ali Doesn’t Speak!”

But the second paragraph of that story read “he was there to promote his upcoming comic book, Superman Vs. Muhammad Ali” and it was on the front page of literally hundreds of newspapers across the planet. Most carried a shot of Neal’s meticulous and beautiful wraparound cover.

Comic books simply did not get this type of exposure in 1978. After the press conference I was offered a job by both Bob Arum and Don King, the two leading boxing promoters at the time and, perhaps, of all time. The next day the head of publicity at Warner Communications called to congratulate me, and then he asked me if I was going to take one of those job offers.

Given the trajectory of my purposely unusual career, I have been fortunate enough (and, at times, unfortunate enough) to have met a lot of celebrities. Most were normal people; a bit isolated perhaps, but pretty much normal. Muhammad Ali had a presence that I cannot put into words. I think I would have felt the same way had I met the Buddha.

His life speaks for itself, in a tone much louder than any pre-fight couplet ever uttered by the three-time heavyweight champion of the world. He was a man of conviction, a man of principle who overcame racism and anti-Muslim sentiments and pro-war hysterics who took his crown for nearly four years during his prime in payment for standing up for his beliefs. Yeah, that always carries a price. Deal with it. Muhammad Ali did, and he won back his title. Twice.

When I think of Muhammad Ali, I think of the man and not the boxer. When he lit the torch at the Los Angeles Olympics in 1996, he body wracked with Parkinson’s, I was moved to tears. Muhammad Ali, the man, was indeed The Greatest.