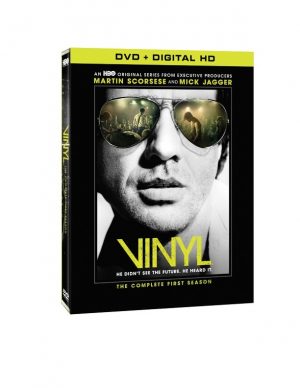 My uncle works in the music business and his heyday was back in the 1970s, so when he recognized the music industry portrayed in HBO’s Vinyl, I took that as an endorsement. Back then, I was buying a new album almost every week (or so it seemed) and was expanding my tastes thanks to the discovery of FM radio. At the time, I never really thought about the business side of music but that came later.

Viewers today can watch people struggle for a career thanks to American Idol and more recently Fox’s Empire. Vinyl, though, takes a look back when sex, drugs, and rock & roll was a lifestyle, not a catchphrase. This was an era that saw popular music splinter every few years so rock begat heavy metal, California rock, and god help us, disco. All of which got rejected simultaneously with the rise of punk and independent artists that redefined the era at decade’s end. There were stars in the making while others were one-hit wonders or aging performers as American Graffiti reintroduced fans to the early days of rock, giving new life to Chuck Berry and others.

Arguably a star in the 1960s and superstar of the 1970s was Mick Jagger so having him co-produce this means it feels right while co-producer Martin Scorsese makes sure it looks right. Our visual memories of the 1970s were brilliantly captured by Scorsese for decades so it’s nice having him give us a weekly dose here. Adding to the gravity such a show needs is the presence of Bobby Canavale, here playing Richie Finestra, founder of American Century Records. His glory days behind him, he’s struggling to keep up with the changing fads and is distracted by his cocaine habit.

We’re in 1973, as Elton John and Alice Cooper begin climbing the charts and diverse talents as Mott the Hopple and Journey formed. Finding the next big thing fuels part of the plot and he claims he’s closing to signing Led Zeppelin, who released Houses of the Holy that year. Yes, some of the threads sound like Empire but that’s the music business and some of these issues are eternal in the field. But Cannavale is the latest in a line of compellingly flawed leads, dating back to James Gandolfini’s Tony Soprano.

He’s supported by a nice cast including Jagger’s son James and more familiar faces in Max Casella, Ray Romano, Juno Temple, and Olivia Wilde (being an HBO series, we see plenty of the latter two).

The scripts from Terence Winter and George Mastras, the show is a finely serialized peek at an interesting time in popular music. A little too much time may be devoted to the soap opera aspects and Richie is a little too much of a loser at times, but overall, this is a satisfying production.

Vinyl: The Complete First Season offers up all ten episodes on three discus and the high definition transfer with an AVC encoded 1080p in 1.78:1 looks great. You get the grunge and the shadows of the recording booth. The rundown feel of the 1970s is nicely replicated here and is matched with the DTS-HD Master Audio 5.1.

The special features are far too perfunctory with the previously aired Inside the Episodes. There is some interesting Audio Commentary on “Yesterday Once More” with Canavale, Romano, Winter and Allen Coulter, “Whispered Secrets” with Casella, Temple, Winter, Jack Quaid, and Mark Romanek; “E.A.B.” with  Cannavale, Wilde, Winter, Randall Poster, and Meghan Currier.

Additionally, there is Making Vinyl: Recreating the ’70s (18:32) but nothing about the context of the times which would have been far more interesting.