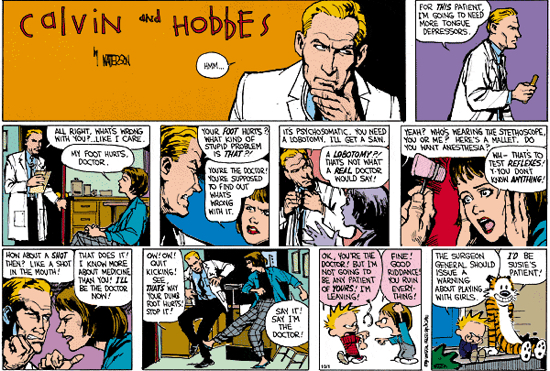 I’m not keen on moving these days. When I switch my homestead to a new location, I have to find all the spots I was taking for granted – food stores, gas stations, mechanics, restaurants and so on. It usually also means I have to find a new newspaper. Yes, I’ve just proclaimed myself to be a dinosaur and I still read the newspaper every morning over breakfast.  Yes, I know they offer electronic editions but I like one I can hold in my hands.

Assuming there is more than one local newspaper (or local-ish), I have to make a choice as to which one I’ll read. I have two primary criterions – where they fall on the political spectrum and what comic strips they have. The latter may be more important to me than the former. I was raised in a Republican household in Chicago so we got the Chicago Tribune which was rabidly conservative at the time. However, I might buy the Chicago Sun-Times from time to time and on Sunday I got the Chicago American; their collection of strips included Prince Valiant. Hal Foster, its legendary creator, was still doing Prince Valiant in the days of my boyhood. That was a treat.

Yes, I know that all the strips I read and more are offered on the Internet but, again, I like having the physical artifact in my hands. It’s a tactile experience. My current paper is the Detroit Free Press and so my comments are limited to the strips I read there. I do read some online because I love them but can’t get them from the Detroit Free Press – the Sunday Doonesbury, Dilbert, Mutts, and Bizarro.

Some I don’t know why I read; I don’t really enjoy them. One theory I heard says that it’s quicker and easier to read them than to not read them. That sounds about right.

One such is Arlo and Janis by Jimmy Johnson. Slow paced domestic comedy. There are days when it is so slow paced I think I’ve fallen asleep and missed something. I know it has a fan base who love it. Not pitched at me, I think.

Non Sequiter by Wiley Miller. This strip doesn’t exist without Gary Larson’s The Far Side (or, sometimes, The Addams Family) but I don’t care. One of my prime reads every day. Sometimes it’s a single panel and sometimes it’s multi-panel sequential. It has a running cast (several in fact) and I admire the variety and Wiley’s versatility.

Luann. Originally I wasn’t that much into the strip but the creator, Greg Evans, has let his cast gradually grow and change. The main character, Luann DeGroot, was in her early teens when I started to read the strip but she has grown older (she’s now in college), a little wiser (but not too much) and Evans has really developed the supporting cast. Continuing narrative plotlines has also become a mainstay of the strip which has helped keep me into it.

Wumo, created by Danish writer/artist duo Mikael Wulff and Anders Morgenthaler. Ugly strip. This is one of those that is easier to read than not read.

Get Fuzzy by Darby Conley. It stars a befuddled anthropomorphic dog named Satchel, a psychotic Siamese cat named Bucky, and their hopeless nerd of a human named Rob Wilco. I read it every day and sometimes wonder why on several levels. Why does Rob keep Bucky who is nasty, delusional, and destructive? Is Satchel too stupid to live? I’m not sure if I like it but I want to read it every day.

Phoebe and Her Unicorn by Dana Simpson. Phoebe is 9-years old who acquires a unicorn as a best friend named Marigold Heavenly Nostrils. At first, I was put off; it all seemed a bit precious and twee. However, I’ve become a big fan. It is smartly written and well drawn. It can actually make me laugh which very few “comic” strips bother to do these days.

Sally Forth, created by Greg Howard and these days written by Francesco Marciuliano and drawn by Jim Keefe. Ostensibly about a woman, her family, and her adventures at work; these days it’s more about the family unit with Sally, her husband Ted, and their daughter Hilary. I think they all need serious medication. Ted was always kind of a goofball but now he gets obsessive and delusional. The daughter is also in need of meds and, at best, Sally is an enabler. Seriously, Dr. Phil needs to visit them.

There are a lot more strips in the Detroit Free Press but I think this is enough for now. Even with the ones that I seem not to like, I read religiously. I learned much of what I know about writing for sequential art from the comic strips and I am indebted to them.

And on days when I don’t get my comic strip fix, I get cranky.