John Ostrander: Back to the Future Tense 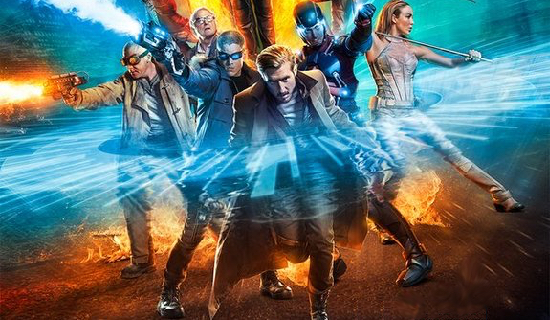 There’s a lot of time travel going on in pop culture these days. The CW has DC’s Legends of Tomorrow where a rag-tag group of misfits travel around with Doctor Who, excuse me, Rip Hunter Time Master, as he tries to stop the immortal villain, Vandal Savage, from killing his family. Oh, and to prevent Savage from really messing up the world… but mostly to save his own family.

In general, I like time travel stories and have ever since I saw The Time Machine (the 1960 one with Rod Taylor, not the 2002 version with Guy Pearce). A great variation on the H.G. Wells story was Time After Time, where H.G. Wells (played by Malcolm McDowell) comes to (then) modern day San Francisco chasing Jack the Ripper (David Warner) and encounters the ever adorable Mary Steenburgen.

I like time travel stories in movies, books, comics, and so on. One of the best – and funniest – time travel comics I read was an eight pager by Alan Moore in 2000 AD. Witty and brilliant. Time travel stories can be difficult to pull off well, however. They need to be internally consistent and should jibe not only with the facts but the tone of the time era. That’s easier when the setting is the future or when the story has future travelers coming into our present.

The Back To The Future movie trilogy did this pretty well. The first and third movies were great; the middle one – meh. I don’t dislike it as much as some people do but it’s not quite at the same level. However, it does have a classic time travel conundrum when our hero, Marty McFly (played by the ever adorable Michael J. Fox), has to go back to the same era he was in during the first film and not meet himself. It’s done cleverly and is internally consistent.

One of the tropes in a lot of modern time travel tales appears to be the traveler is coming back in time to undo something to save the future times. That’s the basis of the Terminator movies, Twelve Monkeys, the aforementioned DC’s Legends of Tomorrow and others. It reflects one of the age-old questions of time travel – if you could travel back in time, would you kill Adolph Hitler before he really got going. (One of my favorite episodes of my favorite time travel series of all, Doctor Who, is called “Let’s Kill Hitler.”)

There’s lots of reasons as to why a given time traveler can’t or won’t kill Hitler – it would result in someone even worse or that time is like a stream and if you attempt to divert it it will find it’s way back to what was changed. One theory of time (and why you can’t change the past) was explained on a recent episode of Marvel’s Agents of SHIELD. One of the group’s scientists explains that time is like a block of Jell-O; it’s homogeneous in that it actually is all happening at the same time and it is only our perception of time being linear that separates one second from another.

I wonder if the prevalence of this “going back in time to save the world” is part of our current zeitgeist. Maybe we sense or feel that something is going badly wrong and the future is coming back to our present to keep a very dystopian future from happening. The event may vary according to your own beliefs and perceptions. Maybe they’re here to stop Trump from being elected or maybe it’s Hillary. (My money’s on Trump, but that’s me.) Maybe it’s George W. Bush and the Iraq War; maybe it’s Ralph Nader because he enabled the election of Bush. Maybe it’s to stop the effects of climate change before it’s too late.  Your versions may vary; these are mine.

I think what it reflects is that we all sense that something is wrong even if we can’t agree on what it is. As usual, our pop culture speaks to that underlying fear, picks up on our gestalt, our group subconscious, and tries to give it form. Art can do that. It can give a physical form to what we feel, to what we can’t elucidate, and shows it to us.

Shakespeare, of course, said it better:

The poet’s eye, in fine frenzy rolling,
Doth glance from heaven to earth, from earth to heaven;
And as imagination bodies forth
The forms of things unknown, the poet’s pen
Turns them to shapes and gives to airy nothing
A local habitation and a name.

That’s also a form of time travel; words from hundreds of years ago still resonate and his voice still lives and speaks to us.

Or, as Doc says to Marty and his girlfriend at the end of Back To The Future III: “… your future hasn’t been written yet. No one’s has. Your future is whatever you make it. So make it a good one, both of you.”

Make it a good one, all of you.