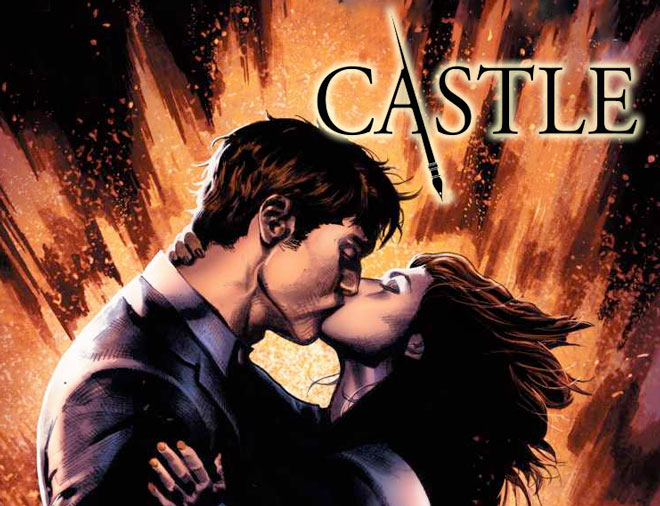 It was announced this week that Stana Katic, who plays Detective Kate Beckett on the ABC series Castle, was not going to be asked back IF the series is renewed for a ninth season. The reason cited was cost cutting which also accounts for the shortened 13 episode season planned IF the show comes back.

The premise of the show is that mystery writer Richard Castle, played by Nathan Fillion, worms his way onto the NYPD and helps the detectives solve actual murder mysteries rather than the fictional ones he creates. Central to the series has also been his relationship with Beckett; he started by annoying her but, after as many complications and delays that the writers could conceive, they fell in love with each other, acknowledged they were in love, and finally married.

Which makes the loss of Katic/Beckett difficult to understand for me. The show may have been titled Castle, but its core was that relationship between the two leads. Yes, I originally tuned in the show because I had really enjoyed Fillion on Firefly (and the movie that concluded that series, Serenity) but it wasn’t the sometimes predictable mysteries or the often interminable story arcs that made me a big fan of the show. It was the relationships between the characters and central to it all was that relationship between Castle and Beckett. That WAS the show so far as I was concerned and has been since the first episode.

Look, I get the idea that the longer a show is on the more it costs to produce and ways need to be found to cut those costs. I would think that going to a 13 week season would do that but evidently not enough to suit the suits at ABC. However, it’s a big risk.

ABC and Fillion have both expressed confidence that the show can continue without Katic/Beckett but I’m not sure. One thing I have learned in comics over the years is that every time you make a big change in a title you run the risk of alienating the fans. The general reason for the gamble is that, hopefully, you will gain more new readers by making the change than the ones you will most certainly lose by making it. You don’t want to give readers a reason to stop reading.

Some titles seem immune to this for some reason. It almost doesn’t matter which creators are doing Superman, for example. The title is going to be there so long as DC keeps publishing. That’s less true for most comics, however, and even less true for most TV shows.

Could it work? Could ABC drop Katic/Beckett from Castle and hope for it to go on? Conceivably. There will be a curiosity value for some fans, at least for a few episodes. Might that bring in new viewers and/or old viewers who have been away? Conceivably. Much will depend on how they handle it starting with how they explain and then deal with the loss of Beckett. I don’t know how they’ll do it. I’m not privy to their thinking. It seems likely to me, however, that they will kill off the character. I suppose they could put her in an off screen coma but I suspect there will be a desire to close the door.

Given this great love the show has established between Castle and Beckett, Castle would have to grieve her death as part of Season 9. If they have him just go out and start romancing and/or bedding a flock of new ladies, that will be a problem for many viewers, myself included. I personally know what it’s like to lose someone you deeply love and that doesn’t get resolved in an hour minus commercials. That takes time. Castle himself would be changed by Beckett’s loss and, if he isn’t, that just trivializes the love affair that has been at the center of the show for eight seasons. It might even undercut the revenue that the reruns of the show generate on other channels.

ABC hasn’t definitively announced one way or the other if Castle is even renewed for that ninth year. My suggestion – don’t. If in order to bring the show back even for a shortened season they have to destroy the central relationship in the show, then don’t do it. Do something else. Let everyone involved go on to other work.

When Tom Mandrake and I were doing The Spectre at DC, we knew about a year ahead of time that the series would be ending due to slowly eroding sales. DC gave us the opportunity to end the book on our own terms and we were able to put a cap on it that made the entire run one story. The ending completed it.

Right now, the ones still watching Castle are the fans. Do the right thing, ABC. Don’t piss all over them. End the show and do it with some style.

It’s not always about the money.