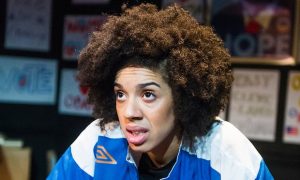 Pearl Mackie was named today as the Doctor’s newest companion. The announcement was embedded during the half time during the FA Cup semi-final match between Everton and Manchester United.

Who?  She was not even on the oddsmakers’ list of potential candidates.

Mackie, 28, is an actress currently seen in the Nation Theater production of The Curious Indicdent of the Dog in the Night Time and was previously seen, opposite Ben Whishaw, in a Years & Years music video.

Mackie graduated in 2010 from the Bristol Old Vic Theatre School, and played Anne-Marie Frasier in Doctors in 2014.

She replaces Jenna Coleman who asked to leave the show in order to play Queen Victoria in a new BBC drama.

“I’m incredibly excited to be joining the Doctor Who family,” she said. “It’s such an extraordinary British institution, I couldn’t be prouder to call the TARDIS my home,” Mackie said in a release.

Mackie’s character of Bill was introduced on the half time show and immediately seen in a short teaser video, which the BBC released to the media. She will debut in the 2016 Doctor Who Christmas Special and then join Peter Capaldi for the current version’s next season which debuts in 2017. The season will be producer Steven Moffat’s final season and he will be succeeded by Broadchurch creator Chris Chibnail.