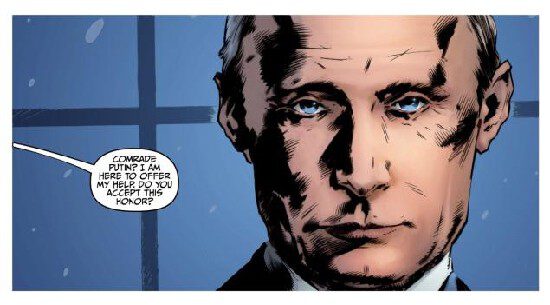 Valiant announced that Vladmir Putin, also known as the real life leader of Russia, would be the villainous mastermind in Divinity II, their next series event. It was announced only a few days ago in an exclusive interview in the New York Daily News with the comics’ writer, Matt Kindt. In the story, our villain manipulates a ’60s-era cosmonaut who has returned to Earth from deep space with super powers and a desire to build a new Soviet empire.

We all know that this isn’t the first time a real life figure has popped up in a superhero story. Obama’s appearance in Spider-Man may have been the biggest one in my lifetime, but hundreds of politicians and celebrities have shown up as guest stars in comics or had comics done about them. However, the vast majority of the time, the real life person isn’t cast as a villain, and especially not without their permission.

The grand exception to this is of course the Nazi Reich and its leader, Adolf Hitler. The difference being those original Captain America comics were used as propaganda to help encourage and keep the American people invested in the war. While I won’t be the first to point it out, Putin has done some pretty mean stuff lately. The U.S. hasn’t been on the best of terms with Russia. But this comic does not sound like it brings the spirit of Captain America with it. Kindt did go on to say that he used Putin sparingly to not diminish his impact. He also pointed out that he never thought about if this was a good idea to piss Putin off in any way.

The thing that bothers me most of all is Kindt’s insistence that because the story is taking place in Russia, it must paint the leader of Russia as the villain. In an industry of constant make believe, this single fact cannot be changed! No matter how much of the story is complete fiction, it would undermine it to change the single fact of who is the Prime Minister of Russia. Stories based in reality can make that small shift from absolute reality. It’s not like we have superheroes with amazing powers in real life. Or do we and no one told me?! Sci-fi has laid the groundwork for a country leader swap in a story or having it be a never-before-heard-of higher up politician in the government. Stories have always had thinly veiled parodies of real world characters without calling them out by name.

I know, in the other hand is artistic license and freedom of expression. I support those freedoms. And yes, public figures are putting themselves in the limelight to be used by the creative element. If it is the only way Kindt could write the story, then I can accept that. But at the same time, people tend to forget that this is a global community and we need to act like it. Americans come off bratty in a lot of ways in the world.

So my question right now: is this one element crucial to the story? Or is this just the main element to Valiant’s marketing plan?