There’s something about team-ups that fascinate fans. And on the big screen, movies like Frankenstein Meets Dracula to Godzilla vs. King Kong, and AVP: Alien vs. Predator were all “can’t miss” affairs. Well, I actually did miss the last one, but it you get the idea. 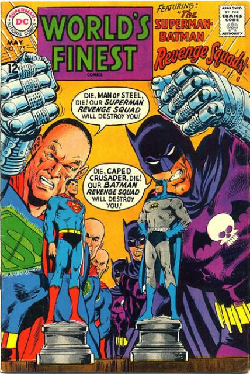 As I write this, the newest superhero blockbuster, Batman v Superman: Dawn of Justice premieres tomorrow. I’m sure the debut has been analyzed to death by the time this column is out, but there’s some strange things going on. And I wanted to analyze it all before the starting gun officially went off and pop culture runs full speed down the track.

One peculiar thing is that I can’t believe I’m not more excited about this movie. If I were to go back in time (ala last week’s column) to tell my 10-year old self that there will one day be a blockbuster movie starring Batman and Superman –together – he’d never believe me.

For years, comic fans delighted to Batman and Superman teaming up in the pages of World’s Finest Comics.  That was one of those comic series with a heart that was hitting its super-stride just as I was really getting into comics. In the late sixties, World’s Finest released a bunch of classic issues in quick succession:

And I’ll never forget that 1968 double page spread ad for CBS’s new Saturday morning cartoons. There were Superman, Batman and Robin. I clearly remember wondering if they’d all be in one adventure, ala World’s Finest. Spoiler alert – they didn’t team-up.

It’s easy to forget that in the mid-80’s, John Byrne’s Superman reboot and Frank Miller’s Dark Knight Returns presented fans with an idea that was radical at the time – what if Batman and Superman weren’t friends? By now, it’s baked into the mythology and not a radical idea at all, but back then it was almost sacrilegious. But after forty years of the World’s Finest team-ups, we all knew it was time for a change in the status quo.

For this Batman v Superman: Dawn of Justice movie, there is a lot of anxiety in Geek Culture and beyond. Before the movie debuted, the 13th Dimension wondered what effect early negative reviews will have on the cinematic plans for the DC heroes and Forbes had written about how Warner Brothers had destroyed the Superman brand.

On the other hand, let’s compare and contrast this to the other big super hero team-up. In Monday’s episode of CBS’s Supergirl, the Flash is scheduled to drop in for an adventure! With his incredible speed powers, he can travel through time, across dimensions and between networks!

This reminds me of when Oscar Goldman was hopping between networks to spend time with both of his bionic friends. The Six Million Dollar Man was on ABC and The Bionic Woman, having been cancelled by that network, was picked up by NBC.

I’m not hearing any anxiety about this TV team-up of Flash and Supergirl. In fact, it’s more reminiscent of a favorite cousin coming to visit during the holidays. It will be fun and you just can’t wait. There’s no overthinking involved.

But the brands of these heroes are different. The cinematic Superman and Batman are dour and serious, while their television counterparts have picked up the mantle of fun and hope. In fact, you may have seen this wonderful open letter a mom wrote to Supergirl stars Melisa Benoist and Chyler Leigh after meeting them at the recent C2E2 comic convention. She talked about what an inspiration these women are in their roles, and especially as they deal with issues of adoption and the effects on families. Carrie Goldman’s article is worth a read.

Movie and TV adaptations are a big deal. I’m currently enjoying Sundance’s Hap and Leonard, adapted from the Joe Lansdale novels. For me it’s still fresh and astounding to see these characters live as a TV series, even though there have been about a bazillion detectives who’ve made the leap from the printed page to the screen.

And that’s why I have this perplexing anxiety about Batman v Superman: Dawn of Justice movie. I hope it’s wonderful and everyone –from the creators to the studio to the theaters to the promotional tie-in partners – enjoy great success.

But now that this World’s Finest movie is finally here, I feel like I have to tell my 10-year old self, in classic geek fashion “After a time, you may find that having is not so pleasing a thing after all as wanting.” We’ll see. And I’m eager to hear your opinions, too. What did you think?

Oh, and I’m also worried I’ll eat too much popcorn. But that’s a worry I have with every movie.