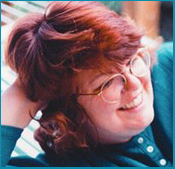 Kimberly Yale, as you know, was John Ostrander’s wife, and it was John’s beautiful tribute to her in his column WWKL? last week that has inspired me to write about her and our friendship.

Kim and I met over 20 years ago at a Chicago ComicCon when she chaired a Women In Comics panel to which I had been invited. I was a real newbie to the biz, wondering what the hell I was doing there, and completely awed to be meeting the real people behind the names on the splash pages of my favorite comics. So I was incredibly shy – yes, hard to believe, but completely true – when I went into the room where the panel was being held and walked up onto the dais. I didn’t know anyone…or at least, it felt like that. Although I do believe that it was Michael Davis  who had promised to come to the panel to cheer me on. Was it you, Michael?

This woman about my age with beautiful red-blonde hair and who just radiated confidence and energy came up to me and said, “Hi, I’m Kim Yale. You must be Mindy Newell. I am so happy to meet you.” I was flabbergasted. “How did you know that?” I said. “Oh, a little birdie told me,” she laughed. (Never did find out who that birdie was.) She introduced me to two of other panelists, Trina Robbins and Joyce Brabner – and they knew who I was, too! We stood talking as conventioneers started filling the room, and I started realizing that I wasn’t such an oddity after all. These were all bright, intelligent women who loved comics just as much as I did!

So the panel started, and we all introduced ourselves, and Kim, as chair, started the discussion with a question that I honestly don’t remember, but my answer was about how Supergirl – the original Supergirl – was such a powerful message for little girls growing up in the 50s, being Superman’s secret weapon and all. After the panel, Kim came over to me and said, “I absolutely loved what you said about Supergirl. I am so glad you’re in this business.”

That was the start of our friendship.

I lived in New Jersey, with the Big Apple outside my windows. Back then Kim and John lived in Chicago. Back before there were cell phones and calling plans, my phone bill zoomed up into the stratosphere with long distance calls to the Second City. I was going through some hard times, and Kim was always there for me, even when it was pushing towards the wee hours. (I’m pretty sure Kim’s bill went up, too.) When Mike Gold recruited Kim for an editor position at DC, she and John moved to Connecticut. Still long distance, but waaaay cheaper than calling Chicago. And, of course, I saw her in the office.

Some things I remember and hold close to my heart:

I was dating a guy who was going to Johnson & Wales in Rhode Island. Kim suggested that we meet at their house for a weekend – which was pretty much at the halfway point – and she and John would vamoose.

Kim and I were doing the Sex And The City thing, just two women sharing lunch and gossip and deep-down secrets at a terrific Italian restaurant a couple of blocks from DC one afternoon when all of a sudden Kim mouthed something to me. I’m a terrible lip reader and I didn’t have a clue what she was saying. “Huh?” I said. She mouthed it again. I said, “What?” again. This time as she mouthed the words, she discretely pointed her finger over my shoulder. The restaurant was loud with lunchtime clients, and I could barely hear her. This time, I said, “Kim, I can’t hear you. What are you trying to say?” Kim was exasperated; she whispered, “Tony Bennett is right there.” I said, in a very looooouud voice, “Tony Bennett!!!! Where?” Mr. Bennett turned around and said, “Right here, ladies.” I was mortified. He was laughing, and Kim was hysterical.

Kim and John sharing the Passover Seder at my parents’ house. Kim’s clear voice reading from the Hagaddah with interest and passion.

Kim calling me to tell me about some physical things that were going on with her, and the fear in her voice, and asking if she should go to the doctor.

John calling me to tell me that the doctors had discovered a second lump in Kim’s other breast while she was on the table.

Kim telling me that she was going to beat this thing.

Kim looking so beautiful in her hats and scarves when she lost her hair from the chemo.

Sharing an intimate moment between John and Kim in the hospital a few days before….

Getting a call from John that I had better come right over.

Seeing Kim on the hospital bed set up in their living room, because she could no longer get upstairs to the bedroom.

Kim sick, wracked with pain, weak – dying – and yet still so beautiful and at peace.

John calling to tell me she was now truly at peace.

Kim’s memorial service, where I honored her by partaking in the bread and wine during the Mass. The minister understanding why I did it. The guests who knew I was Jewish completely shocked.

The spreading of her ashes in the garden under the flowers she had planted.

And in the present…

Sometimes, often, I know Kim is hanging around, keeping me company.

A woman who ran with the wolves.