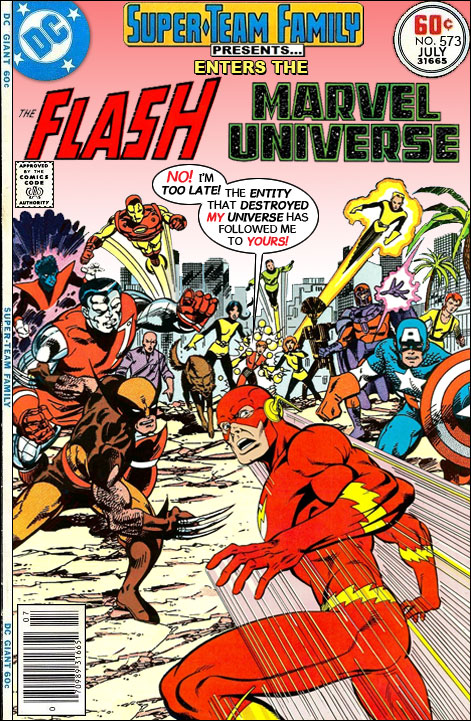 I gave up buying comics monthly basically two years ago. The New52 let me down. Marvel’s events didn’t grab my gaze either. With Marvel’s TV and movies being excellent alternatives, and DC’s archives of animated adventures at my beck and call, I was as comically sated as I needed to be. And seemingly, I’ve not missed much in the down time since.

And then, seemingly out of nowhere, a whole mess of news hit the wires. The two biggest ones to note: Eric Stephenson of Image Comics had the same rant Robert Kirkman had five years ago, and Grant Morrison, Warren Ellis, Garth Ennis, Alan Moore, and plenty of other big names have had prior to them. My ComicMix compatriot Molly Jackson covered it well. For those who are afraid of clicking? Stephenson came out to proclaim it was time to stop cutting corners for short term success, and to celebrate our collective creativity to build new characters and such. You can’t see it, obviously, but I’ve only got one eyebrow and one corner of my mouth in the “up” position.

Stephenson’s call to arms aside, DC went ahead and announced their next short term success gamble “DC REBIRTH”. What is it exactly? It’s not a reboot. It’s not a retcon. It’s not a reshaping of their universe. No, they don’t want you to think any of that. What it is, according to their own newspost, is a line-wide title relaunch. Which is so not a reboot, guys. The non-event begins in June with REBIRTH Specials for Aquaman, Batman, The Flash, Green Lanterns, Superman, Titans, and Wonder Woman. In the same month, there will be $2.99 releases – two times a month – for Aquaman, Batman, The Flash, Green Arrow, Green Lanterns, Superman, and Wonder Woman. Oh, and Action Comics and Detective Comics.

I’d like to stop right here to denote that during an interview about this so totally not a reboot, seriously dudes, DC Co-Publisher Dan DiDio said (and he speaks FAST, so I’m paraphrasing):

“I thought that was a big issue (the price drop). We’ve seen a lot of resistance to the prices creeping up. And it was a great thing for us to get people to reinvest in DC Comics, with these double ships.”

So, if you like Batman (and who doesn’t!)… and you’re ready to reinvest in DC Comics? Well then! Get ready for a REBIRTH special, and 4 issues of Batman between his self-titled release and Detective Comics. Five books in a month. And DiDio was quick to note that REBIRTH brings with it a “return to continuity” and “universe building”. That’s code for you’ll want to buy all the books to see the bigger picture. If that doesn’t set Eric Stephenson on fire from frustration, I don’t know what would.

Therein lay the rub. Every so often, our best and brightest scream to the heavens with desire to change the world. But they seemingly forget their success doesn’t work the same for everyone else. DC Comics won’t invest in new characters, stories, and ideas when they can mine their history in an unending loop. When they hit the reset button twice a decade – or more – it equals short term sales spikes they then attempt to clutch to in order to reach that brass ring of sales they haven’t seen since their last short term spike effort.

And don’t think I’m not looking with a crooked eye at Marvel. Because it’s a whole ‘nother article for me to write about choking your coffers with continuity. All-New All-Different Superior Spider-Verse I’m looking at you.

The fact is no speech will change the way our medium works. The movies and TV shows will rake in the real profits, while the comics continue to build, destroy, and re-release in perpetuity. For better or worse… this is the way of world.

If you don’t like it? Wait 6 months. It’ll reboot soon enough.