Dinah Drake, who when she’s wearing her super heroine costume and not her street clothes goes by the name Black Canary, found a new job in Black Canary vol.4 #1. 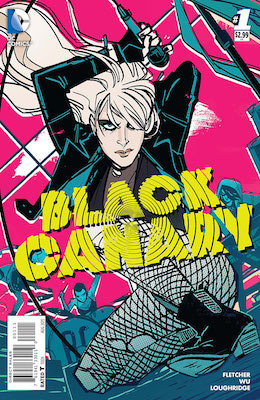 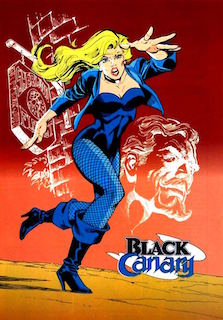 Now she wears a rock star costume – which looks like a shoddy version of the pre-Flashpoint Black Canary costume, goes by the handle D.D., and, oh yeah, is the lead singer for a rock band called Black Canary.

But behind the music, Black Canary is a trouble magnet. Did I mean the heroine or the band? Take your pick. Be it an armed rival rock band crashing a Black Canary concert or a group of overly aggressive “suitors” hitting on women, both figuratively and literally, five of the band’s last seven concerts ended in violence. Ended with D.D. getting into fights with someone at the concert. According to the background information for the current Black Canary series, D.D. is “more comfortable in combat than on stage” and that venues and promoters are “making noise about striking the band from upcoming bills.”

Well I should hope so. Otherwise, there’s a lawsuit waiting to happen.

I mean, let’s assume you’re a club owner thinking of booking Black Canary – the band not the super heroine; you don’t know the lead singer is the super heroine. (Although I don’t know why not. If Black Canary appearing as the lead singer of a rock band called Black Canary and getting into constant fights in which she displayed the same martial arts skills as the super heroine with the same name isn’t an open invitation to piercing her secret identity, it’s only because it lacked an R.S.V.P. card.) Why would you, the club owner, risk hiring Black Canary? Especially when the odds are 5 out of 7 – or 71.43% for the Vegas inclined – that the band will get into a fight which will cause damage to your club or injury to your patrons. Or, more likely, both.

Once the word on Black Canary the band spread – and in these days of social media, the word would spread faster than schmear on a bagel – why would you, or any club owner, risk having Black Canary perform in your club? If your answer is I don’t know, you have what it takes to make a go of it as a club owner. Or in the legal profession. If your answer is I don’t know, that also puts you one up on all the club owners in the DC Universe, who gave Black Canary enough bookings to last through seven issues of her current series.

That, however, is only the first of the lawsuits waiting to happen found in Black Canary # 1. Let’s move on to more serious matters. The band Black Canary is made up of D.D., Lord Byron, Paloma Terrific, and Ditto; plus their manager Heathcliff Ray. I’m not sure how old Lord Byron is but I’m guessing late teens to early 20s. Heathcliff, was a student at Gotham Academy who left the school to manage Black Canary. So he’s a teenager. Probably 18 though, otherwise he couldn’t sign or negotiate legally-binding contracts. Paloma looks to be about 15. And Ditto is a little girl; 10ish. Oh and none of them have any combat or fighting training.

So, naturally, none of them were prepared when weird alien shadow monsters attacked one of their concerts. Black Canary, the heroine not the band, defeated the monsters and learned that they were, for reasons which will, I hope, be revealed later in the series, hunting Ditto.

Because that makes so much sense. Let’s continually put a group of untrained amateurs – at least two of whom are minors – into dangerous situations without anyone to protect them except one super heroine – a lesser-powered super heroine armed with fighting skills and a sonic super scream called the Canary Cry. That’s it for the defense team, Black Canary and four kids who have a total of – what? ten? twenty? – hours training in combat. But no help from Superman, Batman, the Justice League or anyone who would actually be good in a fight against alien shadow monsters. (Hell, at this point, I’d have settled for Ambush Bug.) Not only did Black Canary’s actions court several negligence lawsuits, they were several counts of criminal child endangerment just waiting to happen.

This is not logical. Unless, as Mr. Spock said when he was trying to destroy an android’s logic circuits, logic really is “a wreath of pretty flowers which smell bad.”

Oh and while we’re at it, let’s have this group of untrained kids keep on performing in public concerts in public venues while knowing that they’ll be attacked by alien shadow monsters. That way you can pretty much insure that whenever the alien shadow monsters attack, it will be sometime when large numbers of innocent, and easily injured, civilians will be present. Because, short of shooting a gun into the audience, nothing screams negligence lawsuit like intentionally creating collateral damage. This was the Canary Cry of screaming negligence.

I’ve just gone over this column and found that I’ve given you some incorrect information. What Black Canary did wasn’t, as I said earlier, a lawsuit or three waiting to happen. I was off by a few dozen exponents.