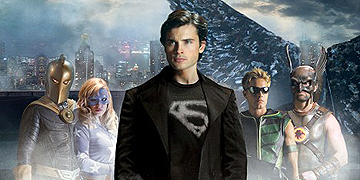 I’ve checked with my cadre of DC contributors, staffers and fans current and past. While it’s impossible to decide on an exact number, the consensus is that in the past ten years the teevee series Smallville painstakingly built a cohesive and linear universe of DC characters while, at the same time, DC Comics reinvented itself in whole or in substance approximately 14 thousand times. Guess which was more entertaining.

And now Smallville’s gone. Pushed out of the way for still another Superman movie that, like the comic books, gets to ignore everything that has gone before it. That’s not entirely bad: Superman Returns was so awful I was thinking of getting rid of the memories by electroshock therapy.

Instead, I watched Smallville. At first I was there out of professional and fanboy curiosity. It was good but not great, and I stuck with it because my wife enjoyed the show. In time, Michael Rosenbaum’s performance as Lex Luthor grabbed me, and when they introduced John Glover as his eviler father, the tension between the two was riveting. When they brought Green Arrow in (using the Grell costume) and started really building their version of the DC universe, I got absorbed.

Then they brought in Erica Durance as Lois Lane. I enjoyed her performance and her character so much I felt like I was betraying my own childhood. More DC characters were introduced, heroes and villains alike. As they moved away from the Kryptonite-villain of the week and developed Zod, Darkseid, and the first interesting Toyman ever, Smallville moved towards the top of my TiVo must-record list. After ten seasons the show had more storylines going on than Soap – but by the time that final episode aired last night, they had resolved or at least tied-up just about everything. It was remarkable; the fact that so many of the actors from earlier seasons returned was even more remarkable.

At its best, Smallville has been about the human drama, and its science-fiction environment rarely mitigated this. It is in this spirit that the two-hour finale was produced. Some might find this to be overbearing; respectfully, I think those people have missed the point. If you take this element out of the story, all you have left is a comic book – in the most clichéd and repellant sense of the term.

The production team also avoided the trap of giving each character their moment to shine. Whereas most had sufficient screen time, this last episode was all about Clark Kent, as it was, by and large, from the very beginning of the series.

This is not to say that there isn’t a kick-ass story here. Two of them, in fact, with enough villains to fill the Justice League’s dance card. Darkseid, Granny Goodness, Lionel Luthor, and of course, his son Lex.

The finale was not flawless. For one thing, everybody showed a lack of respect for how gravity works, not to mention security on Air Force One. The big scene between Lex and Clark was pretty much lifted from The Dark Knight; thankfully, both the characters and the performers make it their own. Technically, this show was at least as proficient as teevee gets. If it were a theatrical movie, it would have been in 3-D, and that would have screwed the pooch.

Teevee is teevee. It’s not comics, and shows come and go all the time. Smallville’s decade was a remarkable achievement, and it set the high-water mark for superhero television.

At the end of the ten-year day, you will believe a man should fly.