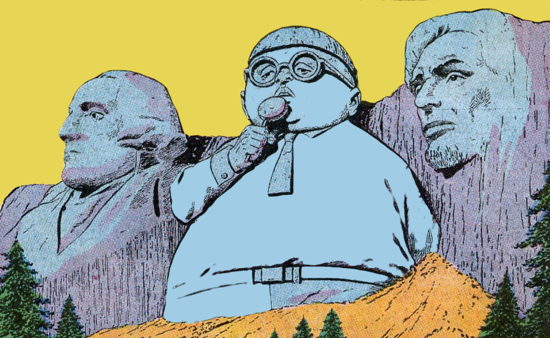 That’s Deadpool? Looks like he’s wearing a costume that Spider-Man gave to the Salvation Army. Superhero, huh? With his own movie. It made how much? A hundred and thirty-five million dollars opening weekend? American money?

Yeah, I didn’t see Deadpool coming either. Oh sure, I caught some of the television commercials, but nothing on the screen made me want to plunk down the price of admission. I thought that maybe I’d watch it on cable, maybe some night after Marifran’s crashed. Or maybe we’d watch it together. Some time. Maybe.

Deadpool is not exactly a household name, like Superman or Spider-Man. Despite a connection with the über-popular X-Men, I doubt that Deadpool has penetrated the public consciousness – or at least he hadn’t, before all those TV ads.

Now? Bet the mortgage money that a sequel is already heading our way.

Savants-to-come may extract meaning – or Meaning – from the Deadpoolian success. I won’t even try. Instead, I’ll content myself with observing that, obviously, the Great Superhero Surge has not waned. And if the showbiz folk can extract a Deadpool from the yellowing pages of ageing funnybooks and transform him into profit, mightn’t there be other forgotten/obscure/abandoned characters waiting for similar transformation?

Here’s a thought: why not take these almost-anonymous characters half way back to their birthplaces – those yellowing pages – and reinvent them as animated cartoons? Not the kind of paperdollish creations that used to inhabit the Saturday morniing wasteland. No, give them the same prime time treatment that was once given to The Flintstones and is currently accorded The Simpsons and The Family Guy. And while, yes, I’m proposing that these new shows feature superheroes, I wrote nothing about human superheroes. With a nod to Ralph Bakshi’s version of Mighty Mouse, let’s resurrect funny animals and, as is done with the Simpsons and Family Guy, give them not-so-funny themes.

Hoppy The Marvel Bunny, anyone?

Another idea? Sure. Four words: Herbie The Fat Fury. And who might he be? Herbie – last name Popnecker – was a tubby, lollypop loving kid who had secret superpowers. These he used to fight evil, which is, after all, what superheroes do, even if they’re not terribly imposing superheroes. Herbie lived on the newsstands, in various titles published by the American Comics Group, from 1958 to 1964. Then, poof. Gone!

I think Herbie has possibilities. He could work as an animation property – again, let us remember Family Guy – or in live action. It might be difficult to find the right actor to play him, but hey! that’s why those folks out on the west coast get the big bucks. The only other snag I can foresee is the “fat fury” sobriquet. Some citizens might find it offensive. Well, okay, drop it if that seems prudent. Not much will be lost if you do.

And admit it: aren’t you just a wee bit weary of muscled people in tight costumes? Like Deadpool?