Emily S. Whitten: Hello, My Name Is Entitled Fan. You Ruined My Fandom. Prepare to Die! 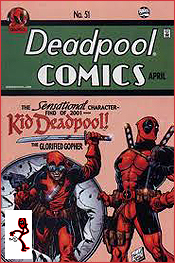 I haven’t talked about Deadpool around here for, oh, say, two whole minutes, right? Time to rectify that!

You know why Deadpool’s my favorite character in the whole wide world of comics? Well, actually, there are several reasons, but one of them is that no matter how dark the character gets, there is also levity there. And call me grandiose, comparing the adventures of a wisecracking merc to the daily toil of Real Life, but really – that can be a true reflection of what we experience. In the depths of disaster sometimes we just have to laugh (possibly inappropriately), and in the midst of our merriment, suddenly one little sentence may bring the room down. That’s life – a perfectly imperfect mix of random ups and downs.

What’s important about the often unexpected comical moments is that they remind us that it’s not all doom and gloom out there, even when sometimes it’s been feeling like it is. And if we don’t get enough laughter in our lives, I fear some of us might turn into this guy. As I’m sure everyone knows, Joe Kubert passed away a few days ago. I didn’t know Joe personally, but I know and like some of his work; and I had a nice chat with one of his sons at a con; and I know several artist friends who have gone to his school (in my home state of New Jersey, no less, which makes it extra-cool). All in all, I’ve never had a bad thought about him, and admire him as much as I do any of the other Greats in comics (yes, he most certainly was one of the Greats, with a capital G). But even if for some reason I hadn’t been a fan, or even if I hated his art (which I don’t), I’d never, ever, have posted something like what that supposed fan of comics said; and then failed at properly apologizing for such insensitive and offensive comments.

The comparison that was made is just inexcusable, and Mike Romo has a good discussion of that at the iFanboy link, so I will not rehash it all here. But I will say that as a fan, I am continuously disappointed in other fans who turn their dislike of a piece of creative work into a giant, seething, pulsating ball of wrath and disgust, to be lobbed at creators and fandom and the internet so we can all experience the pus and bile of some fan’s misplaced sense of entitlement as it oozes down our screens.

Okay, that metaphor was disgusting. But then, I feel disgusted when I read shit like that. And it really does all boil down to entitlement – fans who think that their hateful view of whatever-it-is is more important than the fact that they are throwing vile words or accusations at a Real, Live Person who most likely doesn’t deserve them. A person whom they might even have admired at some point (or still do admire). Likening an upstanding and recently deceased comics creator who worked on a comic you don’t think should have been made (Before Watchmen) to a man who failed to report child sexual abuse is an extreme example, of course, but still; this isn’t anywhere near the first time I’ve seen this kind of disproportionate hatred towards someone whose only fault was making a creative work someone else didn’t enjoy.

Look, I’m not saying we can’t critique what we don’t like. I’m a true believer in the importance of free speech and discussion. But that also means that if you’re being an asshole on the internet or in fandom, I have a free speech right to call you out for being an asshole. And calling hardworking people who make their living making comics “known hacks” or “scab artists” because you don’t like their work or work choices is being an asshole. [See also: anyone who’s ever said so-and-so “raped their childhood.” Because using the word “rape” in that context is another form of entitlement; in which the user assumes it is more important to dramatically emphasize their disappointment in Prometheus than to not casually throw around a word that has terrible connotations for over 17.7 million women and 2.78 million men in America alone. Plus, I just hate that phrase.]

But I digress. Neil Gaiman once wrote a fantastic journal entry on entitlement issues which I think every fan ought to read and re-read. In fact, if someone ever wrote a computer program in which that entry popped up every time some entitled asshole was about to hit “post” on a needlessly vitriolic diatribe about creative works and people they hate, I’d be ecstatic. (Seriously, hackers – stop making useless pop-up viruses and get on that.)* But since that’s not the case as yet, I’d also be happier if we all just read that entry, and tried to remember before hitting post that creators are real people with real feelings and families and needs to put food on the table and all of that. And that it’s probably not necessary to wear a t-shirt saying a real person sucks just because you didn’t like a movie about aliens.

Maybe we could also just run a little test in our heads, similar to the one I wish misogynists would use before speaking (“How would you feel if someone said or did that to your mom/sister/favorite female person in the whole world? Or to you?”) in which we think about how we’d feel if someone likened, say, our dad or our best friend to a guy who ignored reports of child molestation. I’m pretty sure for most of us, that would make us remember that it’s not all about us, and hit the delete key before doing something asinine. So maybe we can all give that some thought before posting something so unwarrantedly hostile about what is, as Romo said, “just comics” (and other pop culture).

Or, as the LOLcats would say: we can fan moar better; and then maybe instead of encountering so much petty bitching, we will instead be rewarded with more things that remind us that life is not all doom and gloom – like this and this. (You’re welcome.)

So until next time, Servo Lectio!

* Disclaimer: I am not actually encouraging anyone to hack anything. Please do not go and do this and then say it’s all my fault, hackers. Thank you.

WEDNESDAY MORNING: Mike Gold, Who Do That VooDoo?