Marc Alan Fishman: So There IS a Spotify of Comics! 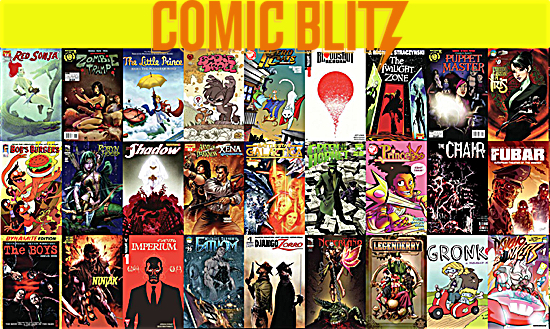 I love it when I’m wrong. I love to be put in my place. Tough love, kiddos, is often the best kind of love. So, just a few weeks ago I shouted at the heavens “Why isn’t there a Spotify of comic books yet, damnit?!” And with that, I figured the universe would laugh at me and that would be that. But nay, dear reader! Not even a day had passed with my posting before I was politely pinged by the founder of a newly minted app by the name of Comic Blitz. And thus I’m here to redact my previous cursing of the heavens – to a point.

Comic Blitz is as I’d demanded; an app that collects a multitude of publishers’ work and offers the entirely of their expanding catalog to the public for a small monthly fee. At the time I cracked open my secret iPad (the one my wife and son don’t know about, so they can’t ask for it, bwa ha ha) and registered for the service, it was a mere $9.99 for a month. I should note you actually get your first month free, so, really… it’s a damn fine deal.

Upon cracking open the app for the first time, I was quick to bypass the splash screen – which owes a UI nod to Netflix – to peruse the list of publishers on board. While I didn’t see the big two and a half… I did see plenty of recognizably awesome names: Action Lab, Dynamite, Valiant, and Paper Films to name a few. A swipe back from Publishers over to the all-inclusive Titles section waylaid me with enough options that I immediately regressed back to the publishers to quell the visual cacophony. This is the future of comics I was hoping for.

Because just as I’d anticipated, with a literal library at my fingertips – devoid of individual issue pricing – came a hunger as big as Galactus to consume as much of it as I could. Within a few taps, and five minutes, I’d downloaded and filled a virtual bookshelf with titles I’ve passed dozens of time. But now, with Molly Danger, The Boys, and Accelerators downloaded, I’m one bathroom break away from numbing my ass to the sound of swiping, as the digital pages flutter by.

Even more important than getting to those titles I’ve eyed for a while though, are the titles I’m now inclined to check out that I’ve never even heard of. A quick tap into Paper Films introduced me to Monolith. Tap, tap, tap, and the book is pitched to me in a single paragraph. And with literally no barrier to entry (assuming rightly that I’d paid for the month already), I’m downloading it in between writing paragraphs of this week’s column. I’m also downloading a handful of titles from small press publishers I’ve never even heard of: Alpha Gods by Markosia from the UK, The Deadbeat from Alterna Comics, and Bodie Troll from Red 5 Comics.

What Comic Blitz is offering is everything I’d hoped for, minus of course DC, Marvel, Image, and Boom!. But being only several months old leads me to believe that this is merely the tip of the pulpy iceberg. We should be realistic though. The big bad boys of comic books are no different than premium content creators akin to HBO, or the WWE – top of the mountain in their respective ecosystems. Comic Blitz is an even playing field. It’s safe to assume even if Blitz becomes ubiquitous in their saturation of the market… that DC is more likely to HBOGO their way into subscription services. But a boy can still dream. And maybe even shout at the heavens. But I digress.

To be honest, I’m rooting for Comic Blitz’s success to spite the bigger publishers. As the New52 did its job of making me swear off current comics, it’s an app and service like Blitz that’s going to drag me back in. This time around however, I’m apt to read those titles on the fringe of the industry (and let’s be clear: Action Labs and Dynamite and Valiant are whales in comparison to the guppies like Unshaven Comics) instead of defaulting back to Green Lantern or Iron Man. And that’s actually a great thing. Just as I’ve expanded my consumption of music, television, and movies… Comic Blitz has opened Odin’s trophy room, and let me finally explore treasures I’d otherwise leave caked in digital dust.

The future is now, and my words make ideas material. I’d like my monkey man now, Rao.