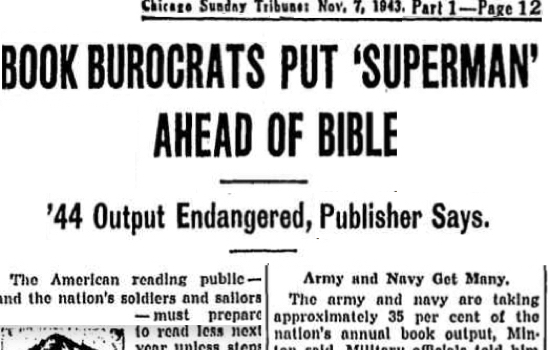 The biggest problem with the InterWebs, particularly for people like me, is that when we’re researching something we first encounter at least a dozen items that look really interesting… and often compelling.

Obviously, if you’re on deadline, this sucks. But if you’re any sort of history freak, that compulsion can be overwhelming. For example, this snowbound weekend I was going through the Chicago Tribune (the Tribune’s online archives are wonderful, in the sense that getting sucked into a black hole of knowledge and culture is wonderful) researching something completely different. And, on page 12 of the November 7 1943 edition, I stumbled across the headline “Book Burocrats Put ‘Superman’ Ahead Of Bible.”

Let us put aside the Tribune’s creative spelling of the word “bureaucrats.” Publisher “Colonel” Robert McCormick, a man so far to the right he made Ted Cruz look like Bill Ayers, decided the American way of spelling was confusing and simply wrong, so he wrote up his own dictionary that became the paper’s official style guide. Let’s look at that piece.

G.P. Putnam and Sons’ president Melville Minton (with a name like that, Mel had no choice but to go into publishing or play jazz trombone) was extolling the virtues of sending publications of all sorts out to our soldiers and sailors for relaxing entertainment and personal edification. He noted that 35% of the then-current output was going to the army and the navy.

Because I have a tendency to think that all public statements carry a hidden agenda – that comes with the Kappa Tau Alpha paperwork – I suspect Mr. Minton was laying the foundation for greater paper allocations. Which, in my book, is swell.

Quoting the Tribune: “Books, Minton said, are the backbone of American culture and unless book publication is continued uninterruptedly military and civilian morale will suffer, education will be handicapped, and the nation will be following, in fact tho (sic) not in intent, the practices of Hitler.

“Stressing the difficulties under which the book publishing industry is now laboring, Minton said, ‘Superman’ had been declared essential to the war program before the Bible by Washington officials (emphasis mine). Hitler burned books but we just stop publishing them.”

Minton said all that over 72 years ago. Outside of the Hitler part, and then only maybe, those statements are as vital today as they were then.