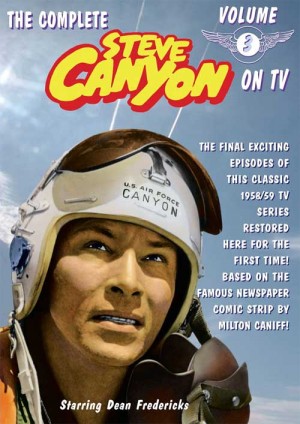 Milton Caniff’s Steve Canyon (1947-1988) was one of the most celebrated adventure comic strips of the 1950s. The blond, square-jawed hero was on the cutting edge of action as he took to the skies and had adventures around the world. Caniff populated the strip with memorable supporting characters and adversaries so it was a rich reading experience.

The strip was so popular that when Captain Action was introduced in 1966, Canyon was one of the first heroes he could turn into. Somewhat earlier, Canyon also served as inspiration for an NBC prime time series that, sadly, bore little resemblance to the strip (a common problem back then).

In 2008, John R. Ellis brought us this forgotten gem with The Complete Steve Canyon on TV Volume 1 and followed up a year later with Volume 2. The silence until late last year when the anticipated Volume 3 finally arrived, completing the run. Thankfully it came with a cardboard sleeve to act as decorative box for all three volumes.

Ellis and his production team were able to use the original 35mm broadcast masters resulting in sharp images. As a bonus the bumpers and some advertisements are replicated as well, giving you a real feel for what TV was like during its first decade.

Across the 34 episodes, airing during the 1958-59 season,the series changed direction and tone as a result of the participation, or lack thereof, from the Air Force. Lt. Colonel Steve Canyon (Dean Fredericks) was depicted as a troubleshooter which allowed stock footage from the military to be put on display. In time, though, the Air Force disliked seeing airmen in anything but perfect light and withdrew their support.

As a result, Canyon was reassigned to be commander of Big Thunder Air Force Base which required no stock footage and could focus on the men and women living and working there. You can watch shift and scramble in volume two but by the third volume, the producers got a handle on what to do with the new status quo and the writing improved. Sadly, though, Canyon never takes to the air again.

The public’s concerns with the Red Scare, the atomic bomb, and foreign spies are woven into several of these episodes to good effect. It’s a shame there are few interesting supporting players for Canyon to bounce off, which could have enlivened the single season. Instead, we are given a nice assortment of guest stars. In this volume, you can see Werner Klemperer, Celia Lovsky, Jerry Paris, Ted de Corsia, Ross Martin, Roy Thinnes, Amanda Blake, John Anderson, Virginia Christine, Dabbs Greer, George Macready, James Drury, William Schallert, William Allyn, Claude Akins, Ron Ely, Harry Townes, and Paul Frees.

The last 10 episodes are contained on two discs and thanks to the source material (a mix of NBC masters and ABC masters when they reran the show), they look and sound terrific. When Ellis couldn’t find masters for “Blackmail” and “Operation Towline”, the original unaired pilot, he was able to use 16mm prints from Caniff’s personal collection. You will see Caniff onscreen introducing the pilot. The pilot is a nice bonus here as is the commentary for each episode this time around. There’s additional DVD-ROM content that includes the unproduced script “Project B-58”.  With so few of the original cast and crew still left alive, the audio commentary comes from Abel Fernandez, an actor, and director Arthur Marks, supplemented with remarks from Ellis, aviation film historian James H. Farmer, artist/historian Russ Maheras, archivist Bob Burns, TV historian Peter Greenwood, and television historian Brad Ulvila.