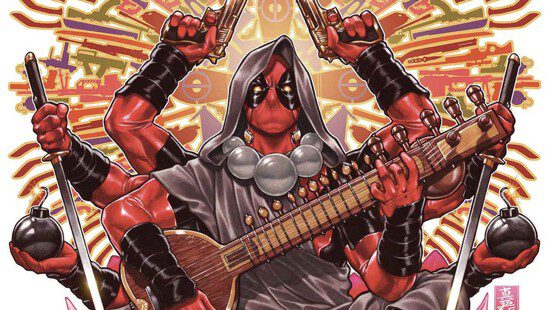 Merry Christmas (or other winter holiday of your choice) and Happy Almost New Year! I hope everyone has been having a wonderful time with family and friends (and food. Ohhh, that holiday food!).

In case you missed it, the Deadpool movie advertising folks have also been having a wonderful time, posting fun “12 Days of Deadpool” featurettes to different news outlets and to their social media.** And because I know the holidays are busy and I am your Deadpool Guru, I am rounding them all up for you here. So, to begin:

The Announcement: Check out the video from Deadpool, explaining the whole thing.

Day 2: People shares pictures of Ryan Reynolds sitting on the lap of his Deadpool movie theater standee (Which is pretty cool, as I can attest because my friends and I posed with him after seeing Star Wars.)

Day 4: Empire shares Deadpool’s Christmas wish list and hints at his upcoming appearance in their magazine.

Day 5: Fandango gives us another new Deadpool movie poster, featuring a sweater I would totally wear (after all, who wouldn’t wear a sweater that Ryan Reynolds says is like wearing “a coffin made entirely out of adorable”)?

Day 6: JoBlo shares Deadpool’s notes from a page of the film’s script.

Day 8: Mashable gives us Deadpool emoji, which are so popular that they ostensibly crashed the servers. (I got them to work! Finally.)

Day 9: We get another awesome new poster via IMAX. (Also, if you see an IMAX movie, Deadpool will appear before the trailers to tell you to go see his movie in IMAX. Truth. I have seen it.)

Day 10: You’ve heard of Yule Logs? Ryan Reynolds gives us a Pool Log and I am very, very happy it’s only a video.

Day 11: On Trailer Eve, the Deadpool movie folks remind us of why we were so excited after seeing the original trailer.

And there, dear friends, are your Twelve Days of Deadpool. Although I’m sure we’ll be seeing more Deadpoolian shenanigans from Ryan Reynolds, Deadpool, and those ad folks, even now that Christmas has passed. After all, there’s still New Year’s!

And speaking of New Year’s – maybe this year Deadpool will finally get around to all of those New Year’s Resolutions he made last year – after all, as far as I can tell, the only one he managed to keep was the one about becoming Really Truly Friends with Ryan Reynolds. Oh well. At least that one went well.

And we’ll see just how well on February 12, when the Deadpool movie debuts. Until then (or next time), Servo Lectio!

*P.S., ad folks – You missed us over here at ComicMix! *gasp* Someone forget to inform you that I am the World’s Biggest Deadpool FanTM (before everyone else TM’d it, honest!) and that I wrote an article advocating for a Ryan Reynolds Deadpool movie way back in 2010? I mean, Deadpool and I have been best buds (one might almost say of one mind) since 2008. And of course I’ve written about the Deadpool movie and Deadpool stuff many a time on ComicMix. But hey! Who’s complaining? (Me. Totally me. Also Deadpool, Bob, Sandi (who broke the news of the Deadpool movie on Ask Deadpool yea, these many moons ago), and the rest of Agency X. Except for Agent X. He’s still snacking, and will be unto eternity.) It’s okay, though, ad folks. You can totally make it up to me. Just send along two tickets to the premiere, and all will be well. Muchas gracias and may all your chimichangas be not beyond their expiration date.

Side note: The Ask Deadpool archives: also the only place you can read about that time Thor decided he liked women with spurs on and dated Outlaw. Really: it happened.