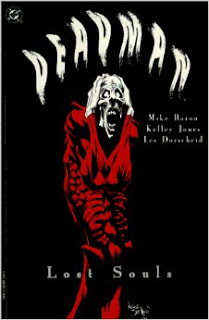 DC Comics thought it was riding a horror revival in the early ’90s, when it turned out they just had the good luck to hire Neil Gaiman to write Sandman. (Sure, the rest of the early Vertigo lineup, and the Vertigo precursors like the Alan Moore Swamp Thing, had a strong horror flavor in their superhero gumbo, but it was always a flavor rather than a main course, and it died out pretty much in parallel to Sandman wandering further and further away from horror.) But, along the way, they put out a bunch of comics with horror flavors — from vampire Batman to the creepiness of Shade the Changing Man — and revived a number of characters with horror in their DNA.

Deadman is one obvious example. He’s one of DC’s third-tier heroes, who’s had an ongoing series a few times but never long enough to really deserve that “ongoing” name. But he is dead, and his power is possessing people so he can use their bodies to do whatever he’s doing at the time, and he was definitely available, so he got scarified and sent off to see if he could attract that Sandman lightning. (Actually, given the timing, I suspect it was Swamp Thing lightning — the bigger bolt hadn’t hit DC yet.)

So the team of Mike Baron and Kelley Jones — Baron one of the more inventive and interesting mainstream comics writers of that generation, with excellent work from Badger and Nexus and a fine run on Punisher at roughly the same time; and Jones an impressionist of the comics page, a heir of Bernie Wrightson with a great eye for grotesques and extreme situations — relaunched a Deadman serial in Action Comics Weekly in the late ’80s, which eventually led to two short “Prestige Format” miniseries in 1989 and 1992.

Those two miniseries — each one was two 48-page issues long, under the titles Love After Death and Exorcism — were collected in Deadman: Lost Souls

in 1995, which stayed in print some time after that. (DC didn’t including printing numbers or dates during this era — in fact, I’m not sure if they do that now — so I can’t tell precisely how old my copy is. Comics publishers are about fifty years behind prose publishers in some very basic putting-books-together stuff.)

The two are discrete stories, but this book tries to disguise that by running them together without separation — it’s a bit jarring to go from the Love After Death “deadend” page immediately to two pages of Exorcism that quickly retell that story and the rest of the Deadman backstory — and they are related, since Love After Death basically breaks Deadman and Exorcism puts him back together. (Well, he actually breaks after the end of Love After Death, but that’s just quibbling.)

So we begin with Deadman sour and unhappy and frustrated — he’s been bodiless for however long its been since his first story in 1967, fighting to keep the cosmic balance for the vague goddess Rama Kushna, and his angst over that is rising. Deadman hears a rumor of a haunted house out in the Wisconsin woods, the abandoned home of a circus owner from decades before, supposedly haunted by the spirit of his aerialist wife. Deadman was a circus performer and aerialist in life, so he’s intrigued and goes to investigate. And he does find the ghost of the beautiful aerialist, who does have the power to touch living people at will — but she’s not the only ghost, and her dead husband is still around and powered by a nasty demonic spirit.

Does Deadman defeat the evil ringmaster and his demon overlord? Well, what do you think? Does he get the girl and (after)live happily ever after? You really haven’t read many mainstream comics, have you?

And so Exorcism begins with Deadman having gone crazy — comic-book style crazy, the kind that’s very demonstrative and can be snapped out of with a bit of help — and roaming around some other woods (in Vermont this time), where he runs into a heavy metal band and a pair of young lovers. The band is quickly possessed by three ancient, and very different, nasty spirits, and the young lovers are quickly in danger. Since Deadman is comic-book crazy, he basically caused that, and capers about gleefully. Meanwhile, Madame Waxahachie — a comics character who makes Amanda Waller look svelte and demure and non-stereotypical — finds the circus booking agent in Boston that Deadman has been possessing to beat up gay men — this part of the plot doesn’t entirely make sense — and drags that man and his regular therapist up to the abandoned church in Vermont where the possessed band is, in time for a guest appearance by the Phantom Stranger (who is as clear and helpful as he usually is).

And then things all go to hell, of course. But, in the end, Deadman is not-crazy again, and the evil spirits are banished back to wherever, and most of the good people are still alive. And, most importantly, Deadman is back to his standard status quo and available to show up in big crossovers and other superhero bumf for another couple of decades. As he did.

These two stories are more than slightly over-the-top; I suspect Baron was out of his usual comfort zone in this supernatural milieu, and he doesn’t deliver his best work here. The art is the real standout: Jones revels in the opportunities to draw cadaverous Deadman in tortured poses (often floating in mid-air) and all of the horribly fleshy monsters that Baron can think up. This is not a pretty comics story, but it’s full of excellent creepy art, and Jones’s inky blacks are well-supported by an equally spooky coloring job by Les Dorscheid.

I’ll be honest: this isn’t a lost masterpiece or anything. But it does collect two decent stories with great art from one of the quirkier characters in the DC Universe. If you have a fondness for DC’s supernatural characters — I know I do, and I don’t think I’m the only one — this could be a fun find.