John Ostrander: The Face We Show 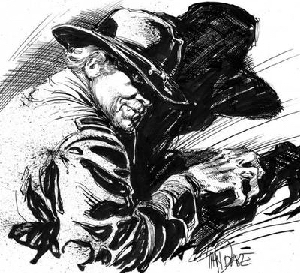 Every once in a while, I’ll come across a picture of me from back in my twenties and thirties or even earlier. I look at myself and what I was wearing and how I wore my hair (I had more hair back then to wear). I sometimes had a mustache, I sometimes had a beard, or even big sideburns and that was always a little bit odd. My beard especially came in sparse in some areas, tightly curled all over, and a touch red. Likewise, I sometimes let my hair grow long although it too was very curly so it never achieved any great length. It was longer on the sides than on the top of my head; I referred to as a bozfro.

I suspect a lot of people look at these older images of themselves and go, “What was I thinking?” And yet, it was a choice that I made. Part of it would have been influenced by the fads and fashions of the time but did I really think at the time that I was looking good?

Occasionally, the look was a little subversive. For two years in college I was both a member of the Reserve Officer Training Corp (ROTC) and the Theater Department. This would have been in the late Sixties so the two were not especially compatible. Every Thursday we were supposed to wear our uniforms to school and to ROTC. This got me odd looks in the Theater Department; we were usually a rag-tag looking bunch of semi-hippies. However, I also told the ones in charge of ROTC that I was in a play and thus has to keep my beard and long hair. (Not true usually but they didn’t know that.) At least once a month our commanding officer would announce to the assembled ROTC that the following week would be an inspection and we all should “shine your buttons, spit shine your shoes, get a shave and a haircut.” His eyes would then rest in me, “unless you’re in a play,” he would mutter.

That was a choice I made back then. Whether we realize it or not, we make those kind of decisions all the time. Every character that we write or draw makes those choices. Even if someone says, “I just throw on any old thing”, that is still a choice. It says something. It may be saying, “I don’t care how I look; fashion is not important to me.” Or it might say, “This way I’ll be invisible; I won’t look any different than anyone else.” It does say something. We are making statements about ourselves whether we intend to do so or not.

As much as the costumes they wear, heroes and villains are defined by the everyday clothes that they put on, the look that they assume. It says something about them. When I taught at the Kubert School, one of my lecture/assignments was to have the students research the clothes that the characters wore when they were out of costume. Bruce Wayne will wear something different than Peter Parker. They will shop in different stores. I wanted the students to be aware and be able to draw different types of fabrics. This all conveys something to the reader.

What a person chooses to wear says something about them, about who they are, about who they see themselves to be. It’s how they present themselves. It’s the same for all of us. What image of ourselves are we presenting? How do we want the other person to see us?

Every line drawn in a comic is defining a person, a place, the action, and every other bit of information. The reader takes it all in. It creates not only a story but a reality into which the readers invests themselves. If the artist, if the writer doesn’t put the information in there, it doesn’t exist.

Certainly, an artist can over render. They can noodle a page to death. They can add extraneous information, as can the writer. The key is to know how much information must be given, what can be implied, and what can be omitted. We don’t want to confuse the reader because that pulls them out of the story, out of the reality we are creating with them.

People, all of us, are like diamonds and each facet reveals some different perspective or glimpse of who we are. The question becomes what are we choosing to reveal and to whom and why, and what are we revealing without realizing it. That changes from moment to moment and person to person. As with us, so it needs to be with our characters. We don’t want to shortchange them or the reader.