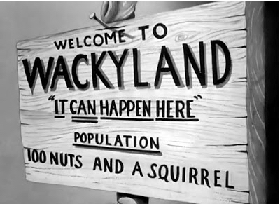 Clara Oswald (Jenny Coleman): “We’re not a team.” Missy (Michelle Gomez): “Of course we are! Every miner needs a canary.” • The Witch’s Familiar, Doctor]. Who, Episode 2, Season 9 • Written by Steven Moffat • Directed by Hettie Macdonald

It was the Missy and Clara show on Saturday night on BBCAmerica.

Yep, the second episode of Season 9 of Doctor Who – The Witch’s Familiar – was a classic “buddy” movie writ large within the parameters of the Whovian universe, a twist on Thelma and Louise with Michelle Gomez and Jenna Oswald brilliantly playing off of each other like a well-oiled comic team of old (Abbot and Costello, Martin and Lewis, George and Gracie) – with a dollop of sociopathic menace and Dalekian evil plans thrown in for good measure.

And how disturbing was it when Clara was inside the Dalek? Talk about a callback! I was waiting for her to say, “Run, you clever boy. And remember me.” Which makes me ask: Does Clara have any memory at all of her previous lives?

Yes, a crackin’ good episode, I would even say fantastic, except for one thing:

Yes, Peter Capaldi looks absolutely kewwwwwl in those “Googlized” Ray-Bans, not to mention devastatingly handsome, but the sonic screwdriver is as iconic in the Doctor Who universe as is the TARDIS. But I shouldn’t be worrying, right? Probably the Doctor reclaimed his screwdriver after he “Exterminate[d]!” the Handmines and took li’l Davros home.

Yeah, those Handmines. Another brilliantly creepy concept there; and another callback to the scarily intimate power of touch in Doctor Who – the Weeping Angel taking hold of River Song’s hand in The Angels Take Manhattan, and Clara herself being the “thing” under the bed who grabs the ankles of the crying boy who will grow up to become the “bloke with a box.”

I read Martha’s column (New and Diverse) and clicked on the link about DC Comics. It’s really, really sad that “affirmative action” or “positive discrimination” or whatever the hell you want to call it is still needed. I have just a few questions:

Not withstanding would-be professionals showing their wares at conventions to the editors of DC, how will an editor know what the pigmentation of the skin is of the person who sent in that utterly terrific story submission with examples of dialogue or art boards of totally beautiful sequential art? Are they just going to come out and ask, “What color are you?” before they offer any work, or at the least, an appointment to meet?

And isn’t that illegal?

Not to mention kinda insulting?

It reminds me of when you go to interview for a job, and you have to fill out one of those “non-discrimination” or “census” or whatever the hell they’re for – the U.S. Department of Labor? – papers where you’re asked to check off your gender and race – and Jesus Christ, people! When the hell are we going to stop using that word? We are all one race! If we weren’t, we wouldn’t be able to make babies with each other! A simple biological fact! If the Department of Labor, or the U.S. Census Bureau has to classify people, why can’t they use ethnicity instead of that word?!

Anyway, every time I fill out one of those things I think of quotas. Like the ones colleges and universities used to have for Jews. My uncle was not able to get into medical school because of his religion, until the University of Arkansas made him a deal – if he could get to the University by a certain date, because they suddenly had an “opening,” they would have a seat for him in the medical school. The date was only 24 hours away, and they obviously thought they were getting away with something, because how could a boy in the middle of the Depression make it from Bayonne, NJ to Fayetteville, Arkansas in one day? But my Uncle Ruby packed up and “rode the rails” with the hobos down to the South overnight – the admission board sure musta split a gut when he showed up on their doorstep, and, yes, they kept their promise.

Yeah, so whenever I fill out that paper I feel a bit suspicious – “What do they want to know for? Because I’m white and a woman and 60-going-on-61 am I going to be disqualified on the account of skin color, gender or age. Yes, all of you young’uns, ageism is out there, and it’s waiting for you. It’s the one discrimination nobody can avoid – if you live long enough.

Seems like the only thing they don’t ask is your religion.

But the way things are going in this country, I wouldn’t be surprised if that shows up, too. The way some of these Repugnantcan Presidential candidates talk, their wet dream is that the UnitedSA will soon be the ChristianSA. To paraphrase Dr. Ben Carson (but not by much): “A Muslim will only be President when you take this gun from my cold, dead hands.”

Ahh, what am I worrying about?