Marc Alan Fishman: To Print Or Not To Print 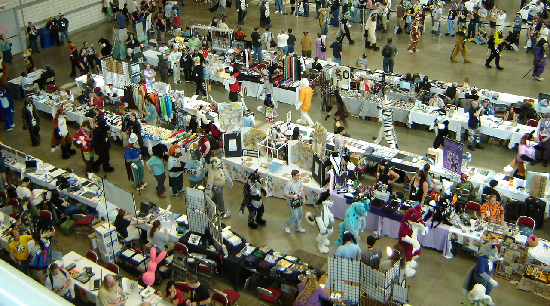 Truly, that is the question.

Last week, I began unpacking my feelings in regards to the trolls of Artist Alley who find it cute to poke the starving artists (well, most of us are starving – I eat decently, thanks to my day job) about presenting unlicensed material. I like to think that I made it pretty clear where I stood in response to those who choose to hate the player not the game. So that brings up a whole new set of feelings in conjunction to that aforementioned game.

As I’ve noted, Unshaven Comics (my little studio, should you not be in-the-know) produces prints as means to an end. A quick laugh by a passerby is all we need to stop them and pitch our real product du jour. And if The Samurnauts isn’t their bag, but a poster is… well, money is money. Money allows us to make more Samurnauts. Hence, it’s always been a win-win situation. Put in economic terms (because I’m a Freak like the time spent to produce a single print yields far more profit in the short term than any comic we’ll ever produce. Let’s break that down.

I’m presently working on a poster for the upcoming New York Comic Con. In total, the piece will take me about 10 hours of actual work to complete. This includes gathering all my resources, laying it out in a sketch, and digitally rendering it. Because my time for Unshaven Comics is free (we’ll come back to that next week, don’t worry), the only cost is the 10 hours I could have been using to work on pages for the next Samurnauts book, and the .88 cents I’ve negotiated to produce the print at a local print shop. Now, we turn around, and sell that poster for anywhere between $3.33 and $5.00 depending (prints are 1 for $5, or 3 for $10… such a deal!). Any way you cut that, it’s a lot of profit. As a benchmark: each comic we produce – largely in small batches due to our severe lack of capital investment – typically costs us $2.85 to print, and we charge $5 for it. Each comic also takes roughly 200-250 hours to produce. Simple math dictates prints are where the money is at.

Take a walk down Artist Alley way and you’ll see that those who are there to move comics are few and far between. Over the last several years, I’ve seen the rise of the back wall at each eight-foot table. Where prints used to pop up as scattered constellations throughout a sea of roll-up banners and a small press affairs… now, a comic convention is a claustrophobic conclave of poster prints from the floor to the ceiling. The average attendee now merely meanders up and down the alley, snickering, stopping, pointing, and absorbing the breadth of artistry Velcro’d to muslin cloths – c-clamped to teetering tri-pods. It makes Unshaven Comics look pathetic to be honest. In our brazen attempt to always bring that cultivated 25% of sheer desperation to our presentation, we’ve adopted a diminutive structure where we’ve lavished the passersby with a short display of half a dozen pieces… half-heartedly hanging from repurposed shower rings.  Again, all in an effort to get a chuckle and a stumble.

I’m honestly of two minds on the subject. As as business man? I respect and admire the printmakers. I’ve more than proven that the economic gains of displaying a mountain of one-off work makes complete sense. Con-goers merely wander past, see what they like, and out comes the wallet. There’s no need for detailed pitches. It’s all short-sales, and deal-making. And because a poster is quick and dirty (depending largely on one’s style of course), with each show, a professional artist can snap up the zeitgeist without batting an eye. Hell, if you’re curious, let me make you a mint right now:

Draw all the Doctors in a single piece. Now FireFly. Now some of those new Star Wars characters. Now Steven Universe. Now Rick and Morty. Go find your local print shop with a digital beast getting dusty in the corner. Negotiate a price– say fifty cents a pop, for a run of 100 each. Go buy a table at the next convention within driving distance. Rake in the profits. Thank me later.

On the other hand of course, my inner auteur beckons. Yes, I know auteurs are saved for film, but screw you, it’s hip and makes me sound smarter than I actually am.  You see, to produce a piece – even if it’s brilliantly rendered in a style truly original to you and you alone – that is in effect not your own intellectual property – is to be profit-minded first. And I can’t help but feel that is antithetical to the spirit of an Artist Alley. There is a considerable difference (to me personally) for a lovingly made Warhol piece versus a Kahlo. And this is in fact not a digression. Put simply: art made from another’s creation is still personal, but will never be as personal as a project plucked from within. In my heart of hearts, I’d buy 1000 of Dan Dougherty’s independently made comic books in lieu of even the best-rendered Poohvengers print any day of the week.

Of course, I’d never say that to his pretty face though…