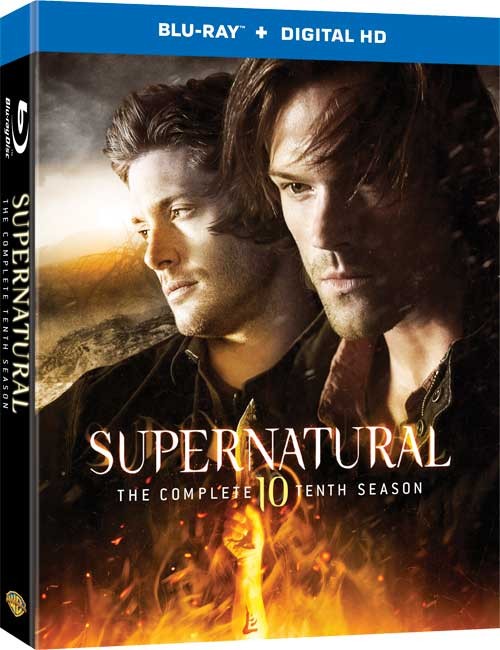 Even though Supernatural has been on for 10 seasons, I only started watching last August.  Though I quickly became a devoted Supernatural fan and by June I wrapped up Season 9.   I figured, “Hey, I’ll just wait until season 10 comes out on Netflix,” but when they announced that the Season 10 DVD would be coming out in the Fall at the Comic Con panel, I was like, “No!”  And when I got the Blu-Ray (which was released on September 8th), I watched it all in like, a week, because that’s what I do.

The Warner Bros. Home Entertainment Blu-ray, Digital HD and DVD release of Supernatural: The Complete Tenth Season is well worth owning. It contains 23 episodes and over four hours of bonus content.  It picks up after Dean Winchester (Jensen Ackles) was transformed into a demon and cursed with the Mark of Cain.  And of course, Sam (Jared Padalecki) & their angel buddy, Castiel (Misha Collins) must help his brother. This is the detour on the Road to Recovery.  Well the scenic route on the road to curing the Mark of Cain.  We also get family drama with Crowley, the King of Hell. You probably need to watch Season 10 a couple times. There’s a lot to little stuff in there that you notice after you KNOW the episode.  It’s the stuff the internet is filled with.  You can’t properly fill the world with Tumblr gifs without watching these episodes many times.  This is why you need to own the Season on DVD or Blu-Ray.

Plus the quality is great.  In HD, you can see each and every one of Jensen’s freckles.  And some might enjoy seeing how silky and soft Jared’s hair looks.  Not me, necessarily, but I did notice the Impala changing from a 2-door to a 4-door periodically.  What the what?  Though maybe you could see that on the regular DVD too.

For those who want to watch on their phones or laptop (out of habit, maybe or because you don’t have a Blu-Ray player in your room and you need to watch with your door shut so your family doesn’t bother you), there is a code with the Blu-Ray to get the episodes on Ultraviolet. You can then watch on all compatible devices & take the Winchesters with you on the road. Yay!

There are lots of bonus features on the discs, like the much awaited gag reel, unaired episodes, episode commentaries, the ComicCon 2014 preview for the season, stuff on mythological influences this season, and more. I was most excited about the behind the scenes for the 200th episode. You should most definitely buy this on Blu-Ray or DVD if you are caught up and start watching the show if you are not. The 11th Season will start this Fall on The CW, so you might want to hurry up. Remember these are the Winchesters, not the Losechesters, so you can’t lose with Supernatural: The Complete Tenth Season.

Maddy’s Commentary & Synopsis of Season 10: For those not afraid of some potential Spoilerishness

Okay,  as far as a Season, this one was so amazing!  We picked up where we left off in Season 9 with the Mark of Cain turning Dean into a demon after his run-in with Metatron (where he died again), so now Demon!Dean and Crowley are living it up singing karaoke in bars. Meanwhile, Sam’s going nuts and torturing demons, trying to find his missing brother, not knowing he’s a demon, so there’s that. Once Sam finally gets to Dean after being kidnapped by some dude, he locks him up in the Bunker and cures him of his demon-osity. And while all this is going on, our angel buddy Castiel’s stolen grace is fading and his fellow angel, Hannah, hunts down rogue angels while she tries to get Metatron to reveal where the rest of his grace is, but to no avail.

After an episode of regular hunting, we reach my favorite episode: “Fan Fiction”. This is the fabled episode where my two favorite things, theatre and Supernatural, come together.  An all girls school performs a musical version of the Supernatural books by Carver Edlund (a.k.a Chuck Shurley) and people who try to shut it down are captured by Calliope. Also in this episode, Sam and Dean are introduced to the popular concept of Destiel (if you read The Tweeks’ column on shipping, you know it’s the Dean/Castiel ship).  By the way, you can download the Supernatural: The Musical soundtrack!  I also really enjoyed the the next episode, “Ask Jeeves” which is like Clue meets Pretty Little Liars. Everyone is a Liar and they’re solving a murder in a mansion with a bunch of rich people, it’s rad.  All the old rich ladies love Sam.

Let’s move on to “Girls, Girls, Girls”. Enter Rowena, a ginger witch who has enemies in high places in Hell’s monarchy, as shown when there are loads of demons chasing her and eventually taking her to Hell’s dungeons. At the end of the episode it is revealed that she is Crowley’s mother and she abandoned him as a child.

In “The Hunter Games,” The Winchesters and Cas attempt to torture the cure for the Mark of Cain out of Metatron who agitates everyone and leaves a cryptic message—“The river ends at the source”. Well, okay, crazy angel scribe. But then next up is an episode where Charlie, my fave, has returned from Oz after fighting a war. She had split her soul in two, good and bad, and she teamed up with the boys to help defeat her rogue bad side.

Then we get some regular hunting episodes, but I want to mention one of them, “About A Boy”.  The witch from Hansel and Gretel turns Dean into a teenager, which is very funny. But the fun doesn’t last for the next ep. Castiel discovers that Cain’s been killing people and Crowley,  Cas, Dean, and Sam work together to kill Cain. This is when things start to get rough. Sam can tell that the Mark is overpowering Dean and that he’s trying hard to fight it.

The stories move on with more hunting and a continuation of the Rowena sub-plot. Rowena has been banned from practicing magic by the Grand Coven, so Crowley captures Olivette, the High Priestess of the Grand Coven so Rowena can make her case to practice magic. After, she turns Olivette into a hamster and puts her in one of those hamster cages with the wheel that they run around in. Sam decides that he and Cas should sneak around behind Dean’s back to try to find a cure. YOU GUYS DO THIS EVERY SEASON! Can’t you ever learn that none of the Winchesters like being kept from things?  But still, they decide to go try and torture the information out of Metatron who reveals that he doesn’t know how to cure the Mark and his message before was utter nonsense. Thanks a lot, Metatron. The only thing he was good for was leading Castiel to his grace, which had a good and a bad side. Cas got his grace back, but Metatron got the angel tablet. Booooo.

After that, Charlie is back, and she has found The Book of the Damned, a book that is believed to hold a cure for the Mark of Cain, but apparently it belongs to the Styne family and so they track Charlie down. I won’t spoil it, but what happens is what drives the rest of the season.  There’s some drama about the Book. Dean wants it destroyed, but Sam wants to keep it because he’s still trying to find a cure for Dean even though his brother has given up.

In the midst of all this, Crowley has kicked Rowena out of Hell. Sam brings the Book of the Damned to her and asks if she can read it. She says yes, but in return she wants Crowley dead.  She also says that she needs Nadya’s codex. She said that the Men of Letters took it from the Grand Coven’s archives and it’s in their archives. Easy, right? Nope, this is Supernatural. The codex is locked in a box which is protected by a very powerful spell. When you open the box, everyone else in the vicinity starts to hallucinate and is driven to suicide. Creepy. Sam doesn’t know this and so he opens the box. Guess who’s in the house with the box in it? You guessed it: Dean. Also the owner of the house who opened the box when she was a teenager and killed her family. Dean starts to hallucinates that he’s in Purgatory with his vampire friend Benny. Ah, Purgatory. Season 7 was nuts, man, with all those Leviathans.

In the next episode, Sam gives the Book to Rowena who says that Nadya was a very selfish witch and encoded her codex. Sam decides to bring in the big guns to help crack the code. Welcome back, Charlie! The boys have captured one of the Stynes, Eldon, and are trying to get information out of him. He reveals that Syne is not their real name, they are actually the Frankensteins. They had to change their name after Mary Shelley discovered them and wrote a book. Rowena eventually drives Charlie nuts, so she asks Cas to let her out. He says no, but she sneaks out anyway, because she’s Charlie. She cracks the code, but Eldon escapes the Winchesters and starts to attack Charlie.  R.I.P Charlie. You were my favorite ginger to ever grace my television, except for Amy Pond, but I’m sure she’s your favorite too.

Dean and Sam give Charlie a proper hunter’s funeral and Dean orders Sam to stop searching for a cure for the Mark of Cain. Sam calls Castiel to tell him of Charlie’s grim end but discovers that her last act on this earth was emailing the code to Sam. He decides to keep going behind Deans back (?????) now that Rowena can read the book. Dean has vowed to kill the entire Frankenstein family and slaughters most of them, then returns to the bunker to find the last three raiding the archives. He kills two of them and listens to the youngest plead for his life, then kills him. This shows that the Mark is truly changing him because the Dean we have gotten to know for ten years would have spared his life. Castiel then shows up and tries to talk to Dean but Dean beats him up and comes very close to killing him while simultaneously breaking my fragile nerd heart. Here we are, the end of the line. The last episode is honestly the best one. There’s this one part where Dean feels like he’s trapped in a place where he doesn’t feel guilty for hurting his friends and after a vampire kill he washes his hands. He does a whole insane Lady MacBeth “Out damn spot” thing. I love Shakespeare so I recognized it immediately. He looks up into the mirror and sees his friends that he’s hurt all bloody and scrubs his hands harder and harder for each person. God bless the writers. He then summons Death, whom I love, and demands that he kill him. Death says that he cannot but he can send him away so he can’t hurt anyone ever again. He then decides to kill Sam so he doesn’t try to rescue him from this far away place. Death hands Dean his scythe to kill Sam, but he kills Death instead. Who knows what this means for people? Is everyone immortal? Rowena then casts the spell to cure the Mark of Cain, which unleashes the Darkness, a pre-Biblical force that is released when the Mark is removed. End of season. Major cliffhanger here, people.

What is the Darkness?