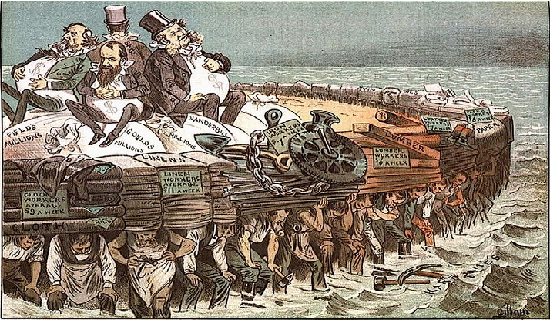 Labor Day. It sounds like a day when we all should be out there laboring our asses off – or, if you’re an expectant mom, the day you give birth. (Now that’s labor!) Instead, it’s a national holiday on which we all un-labor.

The United States Department of Labor defines the holiday as “Labor Day, the first Monday in September, is a creation of the labor movement and is dedicated to the social and economic achievements of American workers. It constitutes a yearly national tribute to the contributions workers have made to the strength, prosperity, and well-being of our country.”

There’s no mention of the bloody Chicago Haymarket Square Riot on May 4, 1886, or of the Pullman strike in that same city almost exactly eight years later, or of the appalling conditions in which ordinary workers, i.e., laborers, had to struggle to make a living wage. Three-day weekends? Are you kidding me? As the Dowager Countess (Maggie Smith) of Downton Abbey asked, “What’s a weekend?” Not only were there no weekends, there were no 40-hour weeks, no overtime, and no benefits. The unionization of industries was looked upon as a plot of anarchists, communists, socialists, and “foreigners” intent on destroying the fabric of American society.

It wasn’t until 1935 and the National Labor Relations Act that the right to organize and bargain collectively, i.e., to unionize, for better wages, hours, and working conditions, especially the safety of employees, had the bulwark of the U.S. government behind it. But immediately corporations en masse fought against the Act – which was progressively weakened until, in 2009, the corporate community used modern media tools and millions upon millions of dollars to create new lobbies, with “New Speak” names like the Workplace Fairness Institute and the Coalition for a Democratic Workplace. The bottom line is that these national lobbies and individual state “right-to-work” laws have effectively killed unions in this country–which claimed that any legislation protecting the right of unions to exist would take away workers’ right to vote for or against unionization in a secret ballot.

And then there’s outsourcing…a product of President Bill Clinton’s North American Free Trade Act (NAFTA). Everybody knows that the manufacturing industry has fled the United States. Basically, the corporations said, “if you can’t join them, fuck ‘em,” and moved their operations to countries where:

So. What does all of this have to do with comics? Well, there was an effort to unionize, back in 1978.

In that year, a group of then A-list writers and artists banded together as the Comics Creators Guild – which is sort of like a union, but for freelancers who are given work but not on an on-going basis. Led by Neal Adams, the group included Cary Bates, Howard Chaykin, Chris Claremont, Steve Ditko (which I admit is surprising to me since he was a follower of Ayn Rand’s Objectivism), Michael Golden, Archie Goodwin, Paul Levitz, Bob McLeod, Frank Miller, Carl Potts, Marshall Rogers, Jim Shooter, Walt Simonson, Jim Starlin, Len Wein, and Marv Wolfman.

Janelle Asselin of Comics Alliance wrote on May 11, 2015, “One of the things the group did was put together a list of recommended rates for publishers.” These rates were (and thanks to Janelle and Comic Book News for this):

I remember talking about the Comics Creators Guild with Paul Levitz and Marv Wolfman when I worked at DC in the 80s; I never really understood why it failed, except that perhaps it is because that, on the whole, creative types are ornery loners. And that there are – despite the growth of other markets and web comics and independent press – still hosts of eager-beaver young talents willing to accept pittance and give up any rights to their work in order to write, draw, letter and color Marvel and DC’s four-color heroes. Still, Hollywood, that bastion of creativity in America (say that with a smirk on your face) is a union town. In fact, you cannot work in the television and movie industry without a union card, and that includes extras, or a guild membership.

Which led me to this thought:

Now that Marvel and DC are firmly in the land of La-La, perhaps the fact that Hollywood is a union town will influence and lead to today’s (and future) comics creators to form a union that lasts. Or perhaps one of the unions and guilds already established will take them under their wing, such as the Writers’ Guild of America – West.

We’ll see. Because, for at least right now, Hollywood is just about the only place in America where unions still have real power.