DENNIS O’NEIL: The Slings of Arrow 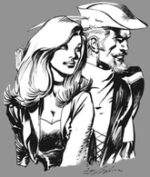 Sauntering through Digitalville, sipping news and trivia like a hummingbird sipping nectar from a flower, looking for nothing in particular, except maybe an idea for something to write about. Anything in the comic book line?

Ah. Here’s a news item (if you can call this kind of stuff “news”) informing us that in the coming season of The CW’s Arrow, there will be more superpowers, including a three-episode arc featuring The Flash, who is certainly one of DC Comics’ mightier superguys – not as powerful as big daddy Superman, but way above, say, The Atom. And there will also be more costumed characters. Will these be equal to The Flash, or closer to the series’ title character, whom I’ve always considered a human-scaled guy, as opposed to a demigod? (And if you want to lose the “demi” how can I stop you?) Or maybe they’ll up Green Arrow’s power quotient – have him stand near a chemical explosion, maybe, and then…I don’t know – use his bow to shatter Jupiter?

And yeah, yeah, I know I referred to the character as Green Arrow instead of the name the video folk prefer, just plain “Arrow.” Well, hey, I knew him when.

I guess I’ll be parking myself in front of the screen on Wednesday nights at eight and watch the questions asked above get answered over the next several months. I may not like the answers, but if I did, the storytellers might not be doing their jobs, which involve engaging a certain demographic, My children are just barely young enough to be part of said demographic. I am way north of it. I am not (Green) Arrow’s audience and so my preferences and quibbles are relevant only to me, and maybe long-suffering Marifran, who has to listen to me express them.

The Arrow story was what I found in Digitalville this morning. This afternoon, it got ugly. Another comic book-related story, the kind we’d rather not see.

It apparently originated at New York City’s CBS outlet, and reported a comic book artist’s loss of 30 years’ work. The artist is my old colleague, Neal Adams. Though I’m not clear on details, it seems that Neal lost the art in a taxicab. I can’t begin to estimate the financial loss Neal has incurred, and bad as that is, the psychological loss might be greater. All those hours of thought and effort and inspiration, hunched over a drawing board, and the sense of achievement and satisfaction manifest in the work…

There is hope. The loss is recent and in the video clip that communicated the story Neal hopes that his portfolios will be returned. So do I.

There is a reward. Somebody claim it, please.