John Ostrander: The Power of Pop 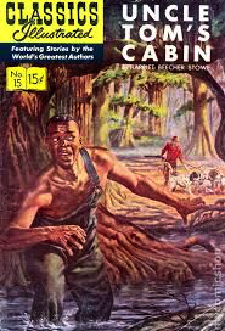 I had reason a week ago to watch Ken Burns’ classic documentary The Civil War – part of the research for Kros: Hallowed Ground, now fully funded at Kickstarter, thank you very much.

Briefly, the series mentioned Uncle Tom’s Cabin, the famed novel written by abolitionist Harriet Beecher Stowe and published in 1852. It was the most popular novel of its day and is credited as a cause of the Civil War. Lincoln supposedly told Ms. Stowe on meeting her after the war started, “’So this is the little lady who started this great war.’” The story is apocryphal, according to most historians.

Pop culture has the ability to change the society of which it is a part. Mind you, that’s not always its intent or even aim. Sometimes a comic book is just a comic book. And maybe it doesn’t change things as overtly and dramatically as Uncle Tom’s Cabin. I do think, however, that pop culture has considerable power.

Pop TV, by featuring black characters and, later, gay and lesbian characters, helped normalize the unknown to the wider audience. People who didn’t know (or realized they knew) or were friends with anyone who was black or gay or lesbian now welcomed them into their living room. Part of the sense of betrayal that people feel with Bill Cosby is that they thought themselves friends with Cliff Huxtable. It was as if they suddenly didn’t know him.

Roots also had a profound effect on the American audience at large. White people found themselves identifying with generations of African-Americans. The show was a phenomenon.

In many ways, I admire what she said. I thought it was far more direct, far more candid, than what you ordinarily hear from presidential candidates.

However, I disagree with it.

I think you do change hearts with the arts and especially pop culture. A show, a song, a movie, a play may reach people and open up their minds a bit because it first opens the heart in ways that arguments, sermons, speeches and so on cannot. In those cases, we’re a bit more guarded. We anticipate our thoughts, our beliefs, our biases being challenged and we may have our defenses up. These days, I post far less political stuff on my Facebook page, not because I believe in certain things any less but because I don’t see any of the discussions/arguments changing anyone’s mind – not mine and not with the person with whom I am having that discussion/argument. That becomes, to me, a waste of time.

I think the way to change laws, you change allocation of resources, you change the way systems operate is by opening the mind and that is done by first opening the heart, by creating a groundswell of demand within the population for that change. Pop culture can do that by skirting the defenses; after all, it wants to entertain us. It must do that first in order to have a right to speak its mind. Our defenses may be lowered and we may be more receptive.

I’m not saying that Pop Culture is the most important agent of change. It’s not Rosa Parks, it’s not the March on Selma, it’s not the Stonewall Riots, it’s not Harvey Milk, or any of a thousand other events that changed our world. However, it is a part of that change or, at least, can be. Sometimes. It reflects where we are, it shows where we can go. To make a change you first have to imagine and visualize that change.