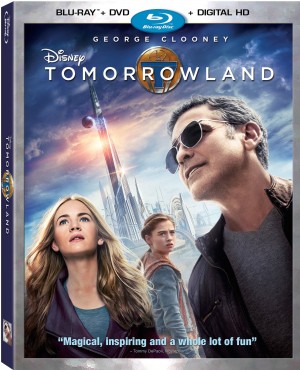 While our love for Brad Bird’s work remains undiminished, his feature film adaptation of Disneyland’s Tomorrowland theme park disappointed at the box office. On the off-chance you missed seeing it in the theaters, the studio has announced the film’s arrival on disc October 13.

SYNOPSIS:
Dreamers Wanted…Disney invites you to an incredible world of epic imagination where anything is possible.  Buckle your seat belt, as the director of The Incredibles takes your family on an action-packed thrill ride.

Join former boy genius Frank (George Clooney), optimistic, science-minded teen Casey (Britt Robertson), mysterious Athena (Raffey Cassidy) and the brilliant David Nix (Hugh Laurie) in a world of pure Disney imagination.  Tomorrowland transports you on an inspiring and magical journey of wonder and adventure to a place where if you can dream it, you can do it.

CAST:
George Clooney as Frank Walker (Gravity, Up in the Air), Britt Robertson as Casey Newton (The First Time, The Longest Ride), Raffey Cassidy as Athena (Snow White and the Huntsman, Dark Shadows), Hugh Laurie as Nix (Monsters vs. Aliens, House M.D.), Tim McGraw as Eddie Newton (The Blind Side)

Discover everything there is to know about the making of Tomorrowland through Director Brad Bird’s perspective.

Believe it or not but Nix used to host a children’s television program about science. Now watch the recently discover outtakes from the show.

An animated story of how Tomorrowland came to be.

Go back in time and watch this original commercial for the Blast from the Past store.

Go back in time and watch this original commercial for the Blast from the Past store.