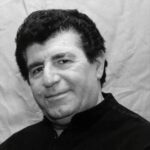 My friend and the man who co-founded First Comics with me 34 years ago, Rick Obadiah, died Sunday night. He was at the gym, and when he got off the treadmill he had a massive heart attack and was dead before he hit the floor.

Sorry for the abruptness. That’s how I’m feeling right now. I’m not going to write this as a traditional obit. I’m really sick of doing that, Rick was too good a friend and, besides, I’m alone in a Holiday Inn in Richfield Ohio right now.

I will tell you that, in addition to being First’s founding publisher, Rick had been an advertising executive and was the former producer for Stuart Gordon’s Organic Theater Company, having worked on such plays as Warp and Bleacher Bums as well as the television and movie adaptations of the latter.

Most recently, he was the president of Star Legacy Funeral Services company – the folks who, among other things, compress their clients into artificial diamonds or shoot their ashes into space. All that was actually pretty cool.

Rick had a fantastic sense of humor and would have appreciated the irony in his dying at the gym. Of course, he also would have pointed out that he would have preferred not to be dead. And Rick would have been shocked to see the incredible amount of responses on my Facebook page his passing received in such short period of time. People remember First Comics – the real First Comics.

Last year, Rick reread a lot of the old First titles and was pleased to see how well they held up. He took a lot of pride in that, for which I am very grateful.

This Sunday, August 23, we will be doing a special tribute to Rick at our Chicago Comics History panel at Wizard World Chicago, at 12:30.