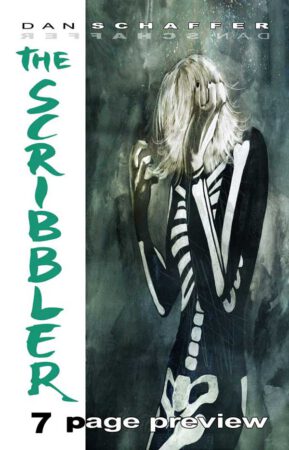 Schaffer’s graphic novel was originally published in 2006 by Image Comics.  A new “director’s cut” of the graphic novel is being prepared by the recently re-launched First Comics™ for release in conjunction with the film’s opening. Schaffer penned the screenplay adapted from his graphic novel.

The thriller centers on Suki, a young woman confined in a mental institution and being treated with an experimental machine dubbed “The Siamese Burn, designed to eliminate multiple personalities.  As the “treatment” progresses, Suki starts to be haunted by the realization that if “The Siamese Burn” is successful, which one of her personalities will be the survivor?

This is Daniel Schaffer’s seventh screenplay to be optioned, and the second to be filmed so far; the first, comedy/horror film Doghouse from Schaffer’s screenplay, was released in 2009 by Carnaby International and distributed by Sony Pictures (Jake West directing).   Schaffer is also known in the comics world for his comic series Dogwitch and his graphic novel Indigo Vertigo (with Katiejane Garside).   NightSky is a production / management firm which also reps Schaffer as a writer client.

The Scribbler is the first of four films in a co-production between New Artist Alliance and Caliber Media.  The two companies have previously produced two movies together, which are both currently in post-production: Static, a horror-thriller starring Milo Ventimiglia (Heroes), Sarah Shahi (Fairly Legal) and Sara Paxton (Darcy’s Wild Life), and 3 Nights In The Desert, starring Amber Tamblyn (Joan Of Arcadia), Wes Bentley (The Hunger Games, American Beauty) and Vincent Piazza (Boardwalk Empire), which Cowan directed.  NAA, known for making over 2000% profit on their first film Breathing Room, premiered their latest feature Extracted at this year’s SXSW.  Growth, another NAA film directed by Cowan, went to #1 on iTunes and has its worldwide television premiere this weekend on The Syfy Channel.

Schaffer has a 7-page preview of The Scribbler on his website.