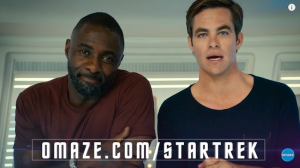 Justin Lin’s Star Trek Beyond has been shooting for a while now, aiming for a July 2016 release as part of Paramount Pictures’ 50th Anniversary celebration. They have partnered with Omaze to offer a winning contestant a walk-on role in the feature film. Current Captain Kirk, Chris Pine, and film guest star Idris Elba made a video to discuss the contest.