Mike Gold: Crawling Out Of The Primordial Slime 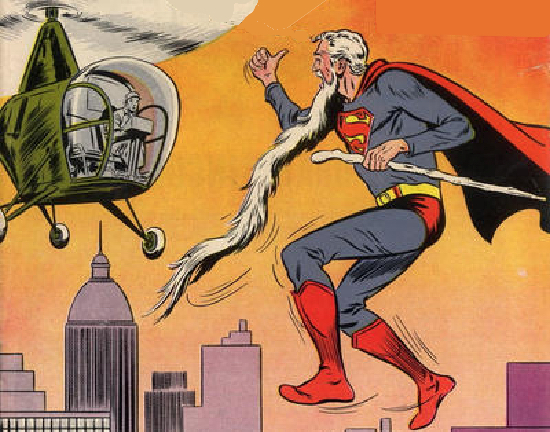 Superman was studying for his Bar Mitzvah on the day I was born.

I’ll save you the math. Superman was “born” in 1938. Both of his parents were Jewish. It is safe to assume that by the time a Jewish boy is 12 he’s probably studying for his Bar Mitzvah.

That means that your erstwhile writer and man-about-town is now a senior citizen. Actually, that happened yesterday, as you read these words. I’m posting this on August 3rd, so even if I get hit by a truck the day before Medicare you still get to read me whining and moaning and bitching about my antiquity.

It’s a shame that comic books have become respectable. Quite frankly, I’d make that argument even if I were only half my age, and that would still be twice the age I act. Because there has been damn little “respectable” about the first 65 years of my life, I plan on leaving through that same door.

I want to hear some even older drug store geezer walk over to his comic book rack scream “Hey! You! Geriatric twit! This ain’t no library!”

Come to think of it, I’ll settle for finding a drug store with a comic book rack.

Unlike every major and about a billion minor mainstream superheroes, I doubt any of us will get rebooted. As you regulars know, I’m not crazy about reboots. If they have to happen at all, they should only happen to people who are held together by staples.

On the other hand, I am held together by a team of people as patient with me as they are critical to me. First and foremost, by daughter Adriane Nash, who transformed my life entirely and massively for the better. All of my brothers and sisters here at ComicMix; it’s amazing what we’ve all went through this past decade. Even amazinger, we made it through the muck. My friends, which include my professional collaborators, which means I am goddamned motherfucking lucky.

To take a step back, what holds me together is the love, support, ego, and craft of the entire comics community. Talent, bureaucrats (yep; I’m one of them), fans, bloggers, store owners, store workers, technicians, movie makers, television show makers, cosplayers, and creative malcontents and misfits: That’s our comics community, and I’m proud and grateful to have been part of that all these ridiculous years.

This pocket dimension of ours is so cool even people who loathe each other do so on a first-name basis. That’s really cool. I mean, when was the last time you heard somebody scream “You degenerate piece of shit! I damn you and all your children born and unborn for the next seven generations…” followed by that person’s first name. There’s a strong possibility that this phrase was uttered after two friends disagreed as to which Jack Kirby creation was better: the Silver Surfer, or Thor.

You gotta love it. My deepest thanks to each and every one of you.

Let’s see how much longer I can milk this puppy.

Thanks and a tip of my hat to Denny O’Neil and John Ostrander, who got there first and showed me the way.