Doctor Who returns to theaters in 3-D, with preview of Series 9 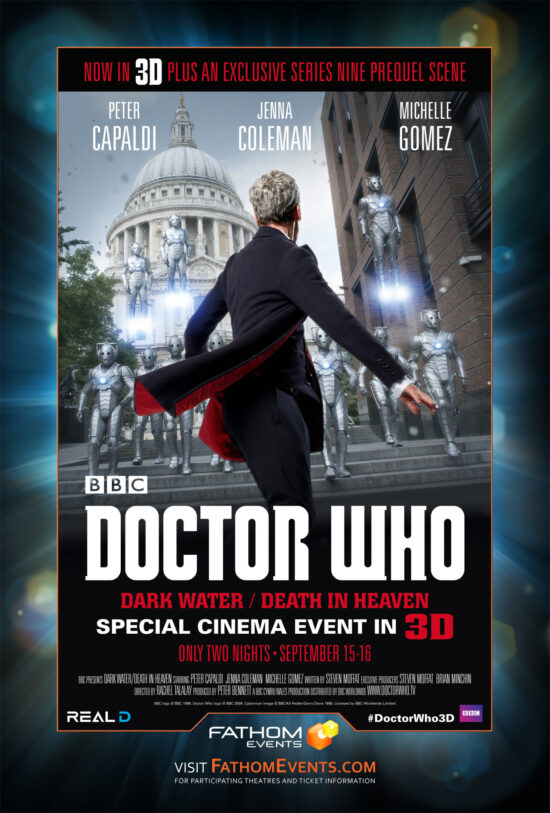 Fathom events will team with BBC Worldwide North America for a national broadcast of the Doctor Who series eight climax Dark Water/Death in Heaven this fall.  Scheduled for September 15th and 16th, and presented in 3D, the event will also feature a new prequel teaser for series nine entitled The Doctor’s Meditation.  In addition Wil Wheaton, former Wesley Crusher and now multiform internet sensation, will host a special interview with Peter Capaldi and Jenna Coleman.

The two-part season finale featured the return of The Master, in the form of Michelle Gomez, who has already been confirmed to re-appear in the two part series nine opener The Magician’s Assistant / The Witch’s Familiar, set to premiere several days after this presentation on September 19.

Fathom Events has had a several-year partnership with BBC, beginning with a national broadcast of the 50th anniversary episode The Day of the Doctor, which the company described as bringing the “largest surges of traffic ever” to their website.  They’ve since broadcast the Series 8 premiere episode Deep Breath, as well as a presentation of the David Tennant two-parter Rise of the Cybermen/The Age of Steel. Fathom have presented a number of genre-friendly events, including an ongoing series of science fiction films “commented on” by MST3K alumni at RiffTrax, and an upcoming return to theaters of the animated classic The Iron Giant.