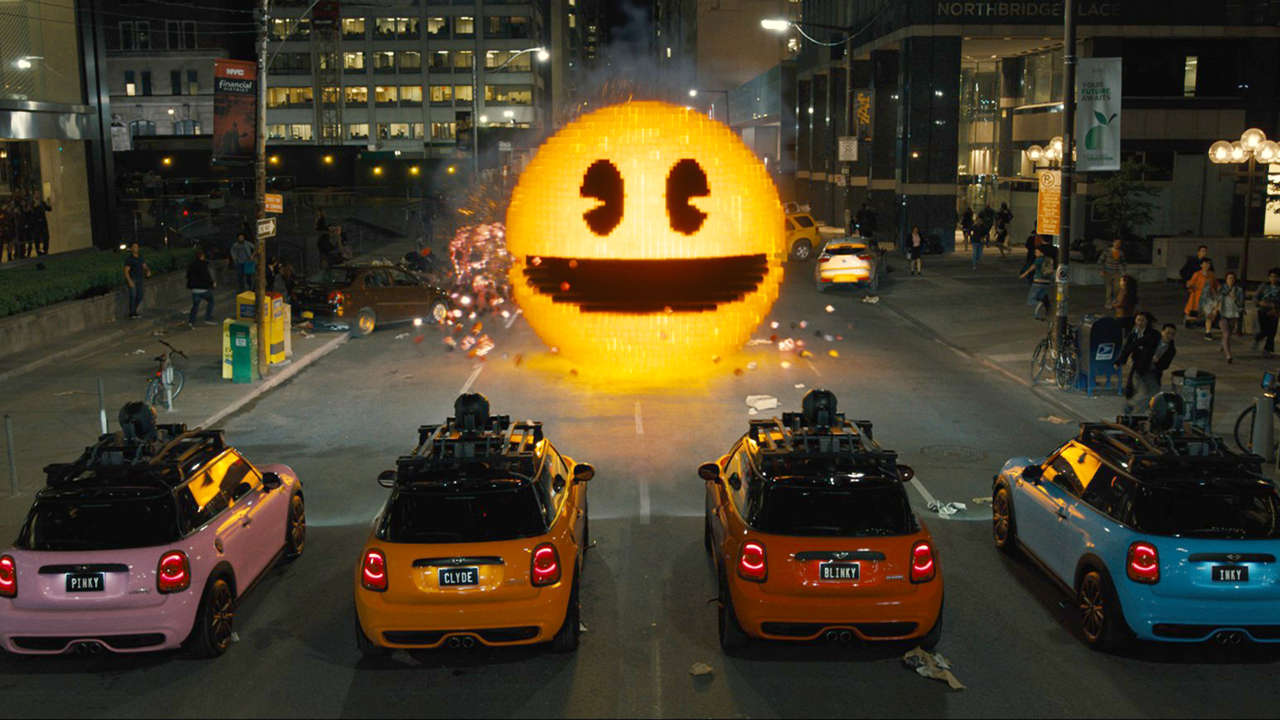 I remember rather clearly the first time I saw the trailer for Pixels. It has a cool introduction about sending examples of 1982 culture in to space and then it quickly moves on to some quick shots of the attack and then the coup de grace of the giant Pac-Man crashing through midtown Manhattan eating a fire truck. For the first minute of the trailer it looked like a movie I would like and then they revealed that Adam Sandler was the star of the movie and all of my interest vanished. I know the kind of movies Adam Sandler makes and they aren’t clever or original, they’re outdated and formulaic. This wouldn’t be a fun deconstruction of old arcade games like Wreck-It Ralph or even a fun action movie like The Last Starfighter. The best-case scenario for Pixels was as the home of a spectacular fart joke. It wasn’t.

There’s nothing in Pixels that feels substantial enough to criticize. The plot is a mess and full of contradictions starting with the premise that aliens recreated video games down to glitches in the 1982 code of Galaga (a crucial plot point for Sandler to prove his credentials early in the film) from a video tape of children playing the game. The aliens communicate through the images of 80s pop culture icons and it’s a nice device, one of the only things that feel that way in the whole film, but other than some exposition thrown in the third act we never learn anything about this menace other than they attack using video games. The movie pretends to venerate this bygone era of arcade gaming but then makes choices that anyone who has even a passing familiarity with the subject matter knows are complete bunk like cheat codes in Pac-Man or Q*bert, famous for his garbled voice and word balloons filled with symbols, giving extensive exposition in English. It feels like everything about the movie was hammered out over lunch one day and no one ever thought about it again. I almost feel stupid complaining about it because I’ve already thought about it more than everyone who worked on the movie.

All of the characters in Pixels are paper-thin nothings but the women seem to get a particularly short end of the stick. The female lead (Michelle Monaghan) is a Lieutenant Colonel and in charge of some nebulous DARPA team but all of her character traits are defined by men she is attracted to (Sandler), she was cheated on by her husband, and she doesn’t want her son to be harmed. She might even do better than Jane Krakowski who plays the First Lady of the United States who doesn’t understand that her husband is busy with his job and demands he make time for ludicrous public dates in some kind of effort to become some shrew singularity. There’s the ideal virtual woman of video games (Ashley Benson) who doesn’t talk even when brought to life by these aliens even when other characters that never talked in their games talk. None of these characters in a vacuum would be that big of a deal but when they’re all like this and even the off-screen female characters are treated poorly (slutty pilates instructor, ex-wife who has an affair with fertility doctor) it adds up to a sour taste in the mouth. Luckily it doesn’t linger because nothing in this film is capable of holding the minds o the audience for more than a few minutes,

Pixels is similarly unkind to nerdy men, a demographic in far less peril in film but one that deserves better than this movie. These characters are all just aspects of the sexless loser nerd stereotype that has persisted for 30 years and should feel outdated at this point. The movie installs a central principle of its anchor relationship that nerds are better kissers because they appreciate it more. The movie wants to play on this nostalgia for pop culture icons and is then spectacularly unkind to the people who would feel most warmly about it. When The Big Bang Theory is doing dramatically better at characterization than your feature film it’s time to scrap the whole thing and move on.

I wish I thought Adam Sandler cared that this is a bad movie. He’s made so many bad movies in a row, produced so many bad movies in a row, that I have to believe he’s either completely insane and believes these movies are fantastic or he knows they’re good enough to get paid, get to the next one, and keep supporting whatever golden yacht lifestyle he lives. I wish he made better movies, selfishly, so I wouldn’t feel compelled to go see these wretched things to review them. We’ve all heard the stories coming out of his next film, The Furious Six, and we can probably guess this isn’t getting any better. Adam Sandler can do better than this, he has before, and I wish he cared enough to do better again.