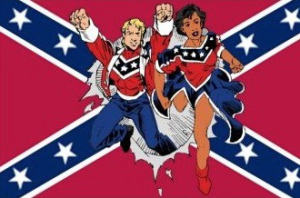 It’s certainly flaggy out there, isn’t it. Flags in the news and flags in the environment.

That’s business as usual at this time of year, of course. The Fourth of July – time to celebrate our nation’s birthday and the way many of us do that is to stick what some call “Old Glory” onto porches and poles, if we can find them.

Then there’s that other flag, the one that’s been in the news. Call it the “Stars and Bars” and you can probably find someone who’ll nod in agreement. But that flag isn’t so much going up as coming down. It’s partisans say that although old S&B merely celebrates the south’s heritage and traditions, nobody can deny that the thing is the battle flag of an army that sought to overthrow the federal government and preserve the institution of slavery. Heap on all the genteel verbal niceties in your repertoire and you still won’t obliterate that nasty slavery business.

But isn’t the First Amendment the crown jewel of our national documentation and doesn’t it guarantee freedom of speech and isn’t flying the flag of my preference an exercise of that freedom? What happened in Georgia – that mass murderer perpetuated by a racist who presumably has no problem with slavery and posed for a photo with old S&B… sure, that was terrible, some would say, but remember freedom of speech! You can’t make me take down my flag!

There really isn’t a big problem here. I can’t, and would not, insist you strike the Stars and Bars that flies on your property, even though I despise its meaning. But flying it on state property is another matter. The conflation of flag and government has to mean that the government approves of what the flag stands for, that it represents national ideals, and the Stars and Bars was created to signify an approval of slavery.

As for Old Glory…if you’re in uniform, you’d better salute it. There might be an officer watching. Treat that flag with reverence, mister!

Or don’t. I never quite understood flag worship. When I was a nipper, I learned (from the Boy Scouts?) that the flag should be accorded almost as much reverence as we proffered to the consecrated host at Mass. There were rules about when it was to be raised and lowered, how it should be folded – and never, never should it be allowed to touch the ground, any more than the host would be accorded such indignity. I don’t think wearing a Scout uniform obligated one to salute Old Glory. But I dunno..better safe than sorry?

What about superheroes? Do they have to salute? Their work clothes are sometimes called “uniforms,” after all. But no. Those aren’t uniforms. “Uniform,” after all, means a style of dress worn so members of an organization – usually a military or law-enforcing group – can identify one another and the status of the wearer within that group. Although there are exceptions, most superhero suits are unique, intended to signify the also unique individuals wearing them.

As for those exceptions: do you really think you wouldn’t be able to tell Superman from Supergirl because they sported similar threads? Or the Thing from the Human Torch?

No, those aren’t superhero uniforms. They’re costumes. Really different things. On behalf of English majors everywhere, I implore you to get it right.

Still, if you’re a superdoer and you happen to be passing a flag…better safe than sorry?